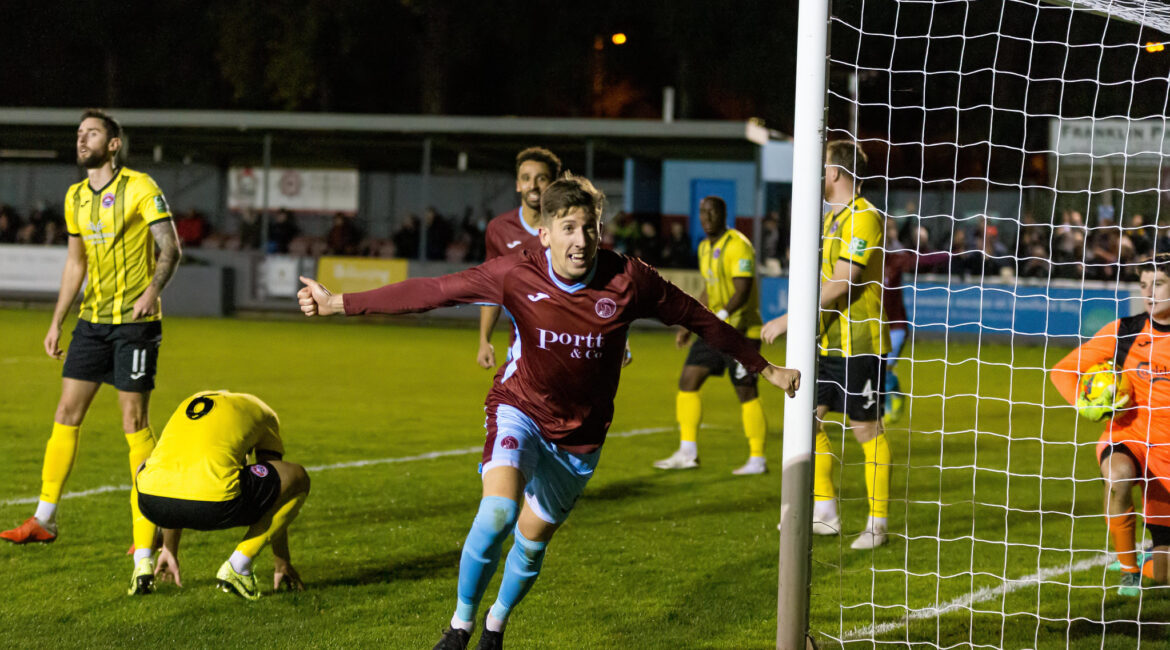 Three goals from Toby Holmes helped the Peacocks advance to the 4th Round Qualifying of the Emirates FA Cup after a terrific 4-2 win over Truro City at the Cygnet Health Care Stadium this evening (13th October).

The meeting of the two league rivals produced a classic cup tie, with Town grabbing the lead after just three minutes when Holmes surged through the Truro defence before slotting home past keeper James Hamon. The lead was doubled after 18 minutes, Holmes netting his second of the night from close range after Nick Grimes had flicked on Jay Foulston’s free kick. Any thoughts of a comfortable night were soon dispelled by the visitors who hit back to draw level with two quickfire goals. Firstly Alex Battle received a cross from the right to turn and curl a shot beyond Lloyd Irish on 34 minutes and then former Peacock Ryan Brett’s shot took a wicked deflection to wrongfoot Irish and find the corner two minutes later.

This failed to deter the Peacocks who came out to boss the second half. Holmes completed his treble just two minutes in when he fired home the loose ball after Jamie Short’s cross had rebounded off the far post before Gethyn Hill headed in from Foulston’s corner seven minutes later to regain the two goal advantage for the hosts. Town had several other chances to increase their tally whilst they defended well to stifle any threat of another Truro comeback and can now look forward to the draw to see who their opponents will be in the next round on Saturday 24th October.

Full post-match coverage can be read in our Results section HERE .