Taunton advanced to the 4th Round Qualifying stage of the FA Cup for the third time in five seasons with a deserved win over their League rivals. Two goals up inside the opening 20 minutes, the Peacocks were pegged back by the break but responded with two more goals in the early stages of the second half to progress, with the visitors never seriously looking capable of staging another salvage mission.

Head of Football Rob Dray named an unchanged team for the seventh successive game since the opening day and his side made the ideal start with a breakthrough after just three minutes. Toby Holmes picked up the ball 30 yards out and burst through the Truro defence like a knife through butter before sliding the ball past keeper James Hamon. Jamie Short’s cross was then fired just wide from 20 yards by Jay Foulston as Town kept up their excellent start.

The White Tigers played some patient football, looking assured on the ball but without really creating any chances of note before they found themselves further behind after 18 minutes. Foulston delivered a free kick in from the left, Nick Grimes glanced it forward and it deflected off a Truro defender to present Holmes with a close range chance which he buried from six yards.

At this stage with a two goal cushion, Town were looking comfortable with their defence working expertly to deal with any Truro threat and when the visitors did have a clearer sight they were equally out of luck, Ryan Brett’s shot from just inside the box being safely held by Lloyd Irish and then Town’s top scorer of the past two seasons Rocky Neal scuffing an effort wide.

After Short’s cross had failed to pick a team mate out in the middle, Truro turned the game on its head with two goals in as many minutes.  Firstly a cross from the right found Alex Battle at the far post and he took a touch inside to turn and curl a shot into the net from 15 yards after 34 minutes. Then, after Ollie Chamberlain had nearly posted an immediate response with a strike that just cleared the bar, two former Peacocks combined as Shane White teed up Brett for a shot from the edge of the box which took a big deflection off Dan Sullivan to wrongfoot Irish and nestle in the bottom corner on 36 minutes.

Truro now had their tails up and the two other ex-Town players in the Cornish side were next to link up, Ed Palmer’s cross picking out Neal but he directed his header past the post while Battle made ground from the left flank, only to slice well wide. After having their lead wiped out against such a capable side, some may have feared a difficult second half but the new breed of Peacocks had other ideas and took control of the game after the interval, knocking in two more quickfire goals to restore their margin by the hour.

The half was only two minutes in when Short’s cross from the right rebounded off the far post and Holmes was in the right place in the middle to bring the ball down and prod into the roof of the net for his hat trick and 9th goal of the campaign . After Short had fired a ground shot just wide, Town then made it 4-2 on the night when the second of successive Foulston corners was met by Gethyn Hill who ran in to plant a header past Hamon on 54 minutes.

The Peacocks refreshingly continued to press forward looking for more. Chamberlain evaded a couple of challenges to fire over and Sullivan, the scorer of two screamers already in this season’s competition, engineered an opportunity but saw his strike palmed down and collected by Hamon. Hill then switched feet to send a dipping shot narrowly over.

Truro meanwhile were creating little at the opposite end. Brett’s free kick was punched clear by Irish for a corner which did nothing, then Irish claimed a return cross from the left after Brett’s corner had been knocked on. The only real moment of concern for Town came when Battle was put through but went down in the box under challenge by Foulston. Despite penalty protests by the visitors, referee Lewis Sandoe who officiated well throughout was unmoved.

The last opportunity for the Peacocks came when Owen Howe was brought down by White, however Foulston’s free kick from 20 yards hit the wall and went behind for a corner. The final whistle was celebrated by the vast majority of the 584 crowd as Town march on, with another £5,625 in the bank and hopes of a decent tie in Thursday’s draw. 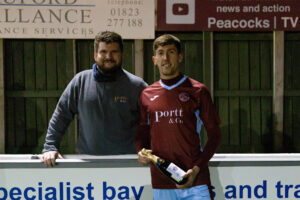