Two goals in a minute just past the hour mark steered the Peacocks to their first League win in five matches. Trailing at the break, Town burst out their shell in the second half to secure the points and condemn the visitors to their fifth successive League defeat.

Town showed only one change from the previous league outing at Metropolitan Police, Harry Kite back in the starting line-up in place of the injured Zak Smith. The crowd had barely settled before Farnborough wasted a great chance to snatch an early lead inside two minutes, Chris Flood releasing Andrew Sealy-Harris on the right but he as he advanced into the box, he scooped his attempt over the bar. Attacking the Invest Southwest End, Dan Sullivan and then Ollie Chamberlain had shots blocked before Andrew Neal tested Liam Beach who turned the strike wide at his post.

Lewis Hall beat two men to fire in an effort which was straight at Beach before the visitors made the breakthrough after 15 minutes, Bradley Keetch curling the ball in from the right which found an unmarked Flood who volleyed against the post and then tucked home the rebound. Reggie Young sent a shot narrowly wide of the post whilst the Peacocks, despite some promising approach play, also had no luck where it mattered. Ben Adelsbury’s shot from 20 yards was held by Beach and both Chamberlain and Neal fired over the top before Neal released Jamie Short down the right but his chip over the oncoming Beach went the wrong side of the far post.

Ryan Brett fired a free kick over as the half ended with Town needing to raise their game after half time. Matt Wright appeared for the start of second half proceedings and immediately made an impact, sticking his head in to win a challenge which Sullivan latched on to but saw his half volley kept out by Tom Leggett on the line. Farnborough then enjoyed a series of attempts on the Town goal, a long range shot from Mitchal Gough held by Lloyd Irish who also made a fine save to palm over Marc Charles-Smith’s close range effort and was then in the right place to catch Ed Cook’s header from Young’s corner.

Town made another swap on the hour, bringing Jack Rice on for Ed Palmer, and within five minutes they were ahead. Neal battled down the left before teeing up Chamberlain whose sidefooted strike from just outside the box whistled in off the post on 63 minutes and a minute later Sullivan collected the ball from Wright and scurried away, cutting inside to drive his shot into the corner from 18 yards. The Peacocks now had their tails up and came close to adding to their lead. Wright put Neal away, but the striker’s attempted chip was parried by Beach who then caught Neal’s follow-up. The lively Rice then stretched to put Chamberlain’s cross just wide of the upright before shooting into the side netting from the left side of the area.

After Neal had seen a shot deflected over, Town put daylight between the sides with a third goal on 82 minutes. Brett floated in a flag kick from the right and Adelsbury’s firm header sailed back across goal into the opposite corner. The visitors mounted some late pressure as they tried in vain to reduce the arrears, Sealy-Harris’ strike being deflected wide and Irish pulling off two more stops, pushing over Perry Coles’ shot and then clawing away a close range header from Gough, the whistle sounding seconds later to confirm the Peacocks’ victory and elevation into the play-off zone. 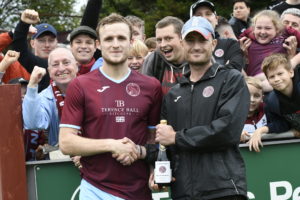 Ollie Chamberlain being presented with his award by Groundsman Simon Best.