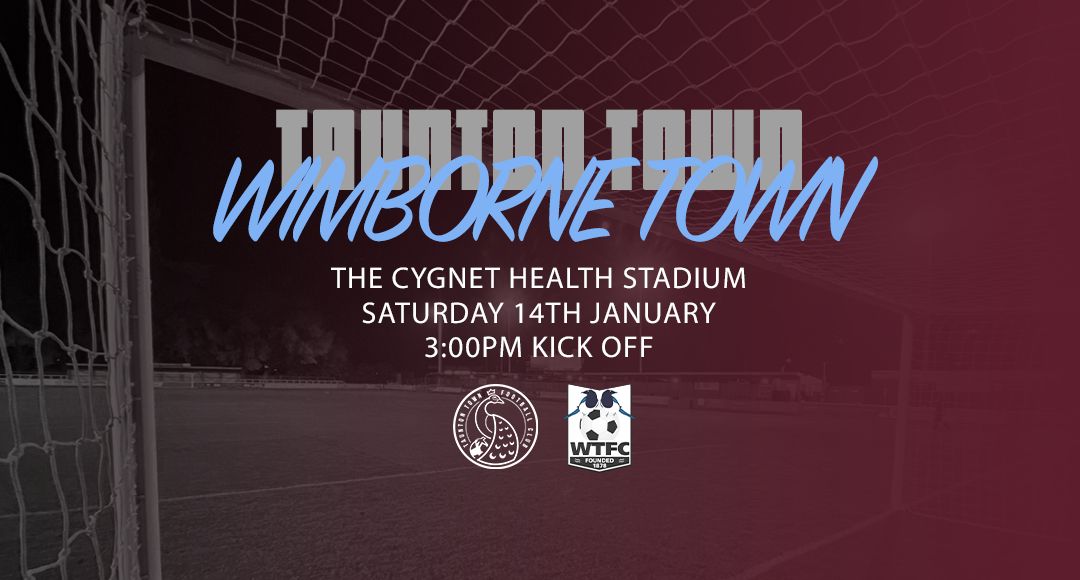 The Peacocks will be seeking to maintain their fine form of late when they host Wimborne Town in the Southern League tomorrow afternoon (15th January), ko 3.00pm.

Town have notched up nine competitive games unbeaten since their last defeat in mid-November, with eight of these being in the League, a run which has seen them rise to 6th in the table with games in hand on four of the five teams above them. The ball is very much in the Peacocks’ court then as they aim to secure their third League double of the campaign at the Cygnet Health Care Stadium tomorrow, having won 4-1 on the opening day of the season, the first competitive game at the Magpies’ New Cuthbury stadium. After falling behind to a Lewis Beale goal, the Peacocks hit back to claim the points through two goals from Jared Lewington, one from Jack Veale and a Toby Holmes penalty. Since then, tomorrow’s visitors have endured a difficult season, lying at the bottom of the table with 11 points from 22 games played. They have only picked up two victories to date but both notable, with a win at Salisbury and a home success against Gosport Borough, whilst they have also gained draws at the likes of Metropolitan Police and Walton Casuals.

The Magpies have strengthened their side recently, signing Bouwe Bosma from Gosport and Dan Bartlett from Poole while popular goalkeeper Gerard Benfield rejoined them last week after leaving Weymouth. The Dorset side will come into the game with their confidence boosted by their 6-0 win over Gillingham Town in the Dorset Senior Cup in midweek. The Peacocks meanwhile will be without Lewington for the next two games due to suspension after he was sent from the dug-out at Dorchester last weekend. Toby Holmes should be fit to return after going off injured in the same game while Zac Smith is doubtful with a sore toe.

Despite his side’s good run, Head of Football Rob Dray remains cautious. “Tomorrow is another game where we don’t look at the table,” he said. “They scored three against Truro last week and have recruited well during the past few weeks so we can take absolutely nothing for granted. Momentum is key however and we have that. We have got ourselves into a very healthy position and now we must make sure we continue to build on that. Our home form has been very good so hopefully we will get a big crowd tomorrow to back us.”

A reminder that advance ticket sales online are no longer available for home fixtures. Admission is payable by card or cash at the turnstile only priced at £10 for Adults, £8 for Concessions and £5 for Juniors (14-17 years). Under 14’s are free on condition they are accompanied by an adult. Unaccompanied Under 14’s will not be admitted.

Match Programme is online only and can be read HERE

Our Matchday Mascots are Ruishton Under 9’s