Chippenham Town then visit the Cygnet Health Care Stadium on Monday afternoon but before then Town will hope to build on last Saturday’s win over Dartford, a victory which finally kick-started their campaign following a goalless draw and two single goal defeats from their opening three matches. That win left Town occupying 16th spot in the table. St Albans meanwhile also picked up their first three points of the season with a 2-1 victory at Cheshunt last Saturday after two draws with Chelmsford City and Hungerford Town and a 1-0 home reverse to Oxford City, leaving them three places and one point ahead of the Peacocks in 13th position.

Tomorrow’s contest then is poised to be another tight affair based on early season form as Town find their feet in the National League. Zac Smith is included in the travelling squad for the first time this season after a spell out injured. Head of Football Rob Dray commented:” It’s another massive ask against an established team in this League. However it’s good sometimes to be the underdogs. We need to carry everything forward from last week into this weekend. There is no breathing space at the level we’re at now, every game is tough, and we must be organized from 1 to 11.” 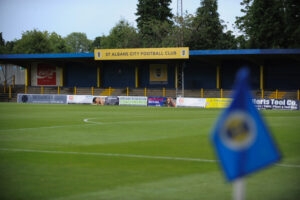 Directions: Exit M25 at Jnct 19 and take the A41 to Watford. Take the A405 ramp to M1/St Albans/Leavesden and continue on A405 towards St Albans. At the St Stephens roundabout, take the exit onto Watford Rd/B4630. Continue on B4630 until reaching roundabout and take A5183 St Stephen’s Hill. Continue onto Chequer Street A1081 before taking 4th exit at the roundabout onto Hatfield Road A1057. Continue over two roundabouts and take left turning into Clarence Road, then left into York Road.

Last meeting: there has been one previous meeting of the clubs, coming on 10th October 2018 when the Peacocks sprung a surprise in the FA Cup 3rd Qualifying Round, beating City 5-2 at the Cygnet Health Care Stadium. Relive the match highlights HERE