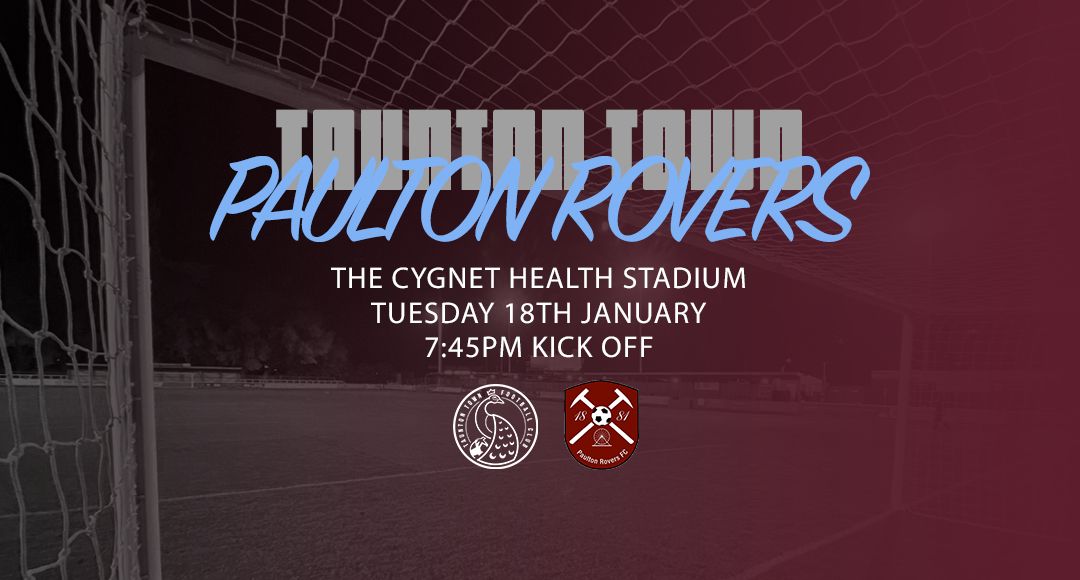 The Peacocks have the opportunity to reach the Semi-Final of the Southern League Challenge Cup for the first time in their history when they entertain Paulton Rovers tomorrow evening (18th January), ko 7.45pm.

The Quarter-Final tie was originally scheduled to take place last week but had to be postponed due to a waterlogged pitch at the Cygnet Health Care Stadium. There should be no similar issues for the tie tomorrow when Town will be hoping to overcome their visitors from Division One South who currently occupy 7th spot in the table. They have won 11 and lost 9 of their 22 fixtures played to date although they have lost their last three games, against Larkhall, Frome and most recently a 4-1 defeat at Highworth at the weekend.

Rovers played Highworth at the Preliminary Round stage of the competition, winning 4-1 at home, before triumphing on penalties at Bristol Manor Farm in the next round following a 2-2 draw after 90 minutes. They then thumped Wimborne 6-1 at the New Cuthbury in the 2nd Round but had to go to another penalty shoot-out in their most recent tie, coming out on top at Lymington Town after Rovers had equalised in stoppage time to force a 1-1 draw.

The Peacocks, who will be aiming to continue their 10 game unbeaten run tomorrow, also had to go to spot kicks in their first game in this season’s competition, prevailing 4-2 on penalties at Bideford following a 1-1 draw at full time. Progress since then has been more straightforward, with 6-0 and 3-1 home wins over Barnstaple and Truro respectively before a 2-1 success at Weston-super-Mare in the 3rd Round saw them reach the Quarter-Finals for only the second time ever. The first occasion came back in February 2011 when Chippenham Town won 2-0 at the Cygnet.

Striker Jared Lewington sits out tomorrow’s tie as he serves the second and final game of his ban following his dismissal from the bench at Dorchester.

A reminder that advance ticket sales online are no longer available for home fixtures. Admission is payable by card or cash at the turnstile only priced at £10 for Adults, £8 for Concessions and £5 for Juniors (14-17 years). Under 14’s are free on condition they are accompanied by an adult. Unaccompanied Under 14’s will not be admitted.

Match Programme is online only and can be read HERE