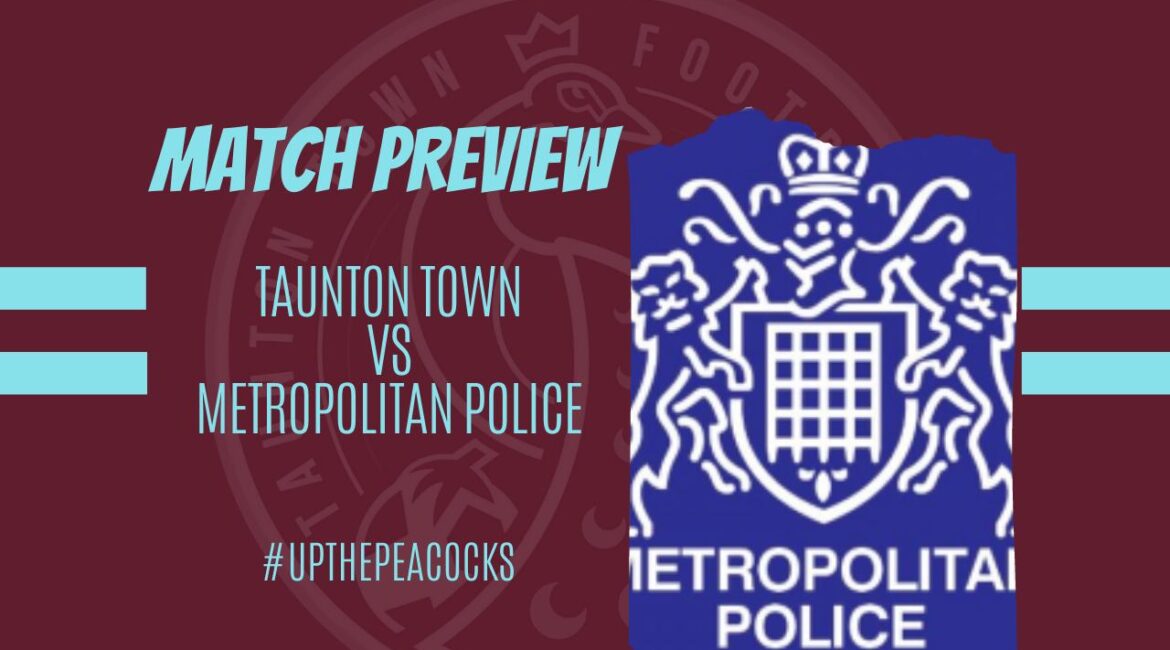 After the FA Cup elation of midweek, it’s back to the Pitching In Southern League for the Peacocks tomorrow (17th October) when they welcome Metropolitan Police to the Cygnet Health Care Stadium, kick-off 3.00pm.

Tuesday’s excellent victory over Truro City maintained Town’s unbeaten start to the campaign totalling seven games, a fine achievement against some very good sides and especially creditable given the squad contain a large number of new faces. The team are growing in confidence and belief with every match but their early season form will again be put to the test tomorrow when the Police travel down from their Surrey headquarters.

The Met side are sitting in fifth spot, one place above the Peacocks but level on points and having played one game more. They were undefeated in their first three League games before losing at Swindon Supermarine but bounced back to beat Gosport Borough 3-1 last weekend. They also hold the upper hand over Town from previous meetings, gaining the League double in 2018-19 when they reached the Super Play-Off Final  before the Peacocks recorded their first win over the Police in their most recent meeting, edging home 4-3 last December.

Head of Football Rob Dray has a full squad available with no injury concerns. He commented:” Tomorrow is another tough game against a very capable Police side. With two cup games coming up it’s important we keep our momentum going in the league where we have made a respectable start. However we have never had an easy game yet against the Met Police and we will need to show the application and desire we displayed in midweek to make sure we get another positive outcome tomorrow. I look forward to seeing another good-sized crowd to support us which can make all the difference.”

Tickets remain on sale for tomorrow’s game via Eventbrite HERE priced at £10 for Adults, £8 for Concessions and £5 for Under 18’s, with all tickets subject to a booking fee. Don’t forget though, to avoid having to book tickets for every game, Season Tickets are still on sale which entitle you to free entry to all home League fixtures. After having played only one home League game so far, the ticket still represents great value for money at a reservation price of £80 for Adults (18-64 years), £60 for Concessions (State pensioners and students with ID), £40 for Juniors (Under 18’s) and the newly introduced Season Ticket for Under 11’s priced at just £15, with the full balance for each tier of Season Ticket payable later in the season. Payments can be made via BACS, cheque or by card to Finance Director Alan Slade who can be emailed finance@tauntontown.com or phoned on 07900 897249.