The Peacocks are back on the road for their next National league South assignment when they visit Hungerford Town tomorrow afternoon (3rd September), ko 3.00pm.

It’s now three games unbeaten for Town in their new environment with successive home wins over Dartford and Chippenham Town sandwiching a well-earned draw at St Albans City last weekend. That result saw the Peacocks earn their first away point of the season after narrow 1-0 defeats from their opening two journeys so they will be aiming to keep that nice little run going against a Crusaders side which is now in their 7th season at National League level, having harvested five points from six fixtures to lie in 18th spot. Their record after three games was identical to Town’s after a 0-0 draw and two single goal defeats before they picked up their only victory to date over Eastbourne Borough by a 2-0 margin. Their last two games have seen them again suffer a narrow 1-0 reverse at Chippenham Town followed by a 1-1 home draw with Weymouth on Bank Holiday Monday.

The Peacocks have a poor record at Bulpit Lane, having previously visited four times in the Southern League and twice in FA Trophy ties between 2009 and 2013, resulting in five defeats and just a single point gained. Buoyed by their convincing win over Chippenham on Monday, hopes will be high that this trend can be reversed with a positive result tomorrow. Head of Football Rob Dray names an unchanged squad from Monday, with midfielder Joe Guest not yet fit to return following his ankle injury sustained at St Albans. The Town boss commented:” Gaining momentum in this League is difficult. We have a week’s worth after going three unbeaten, so we have to protect it, keep the doing the same things and maintaining our standards to give us the best opportunity. Hungerford have been outstanding during the last two years though so it will be a massive test.” 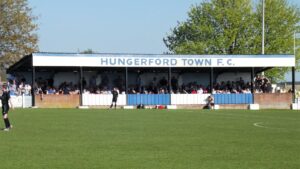 Tickets can also be purchased online in advance for a discounted price of £12.50 for Adults and £10 for Concessions. The fee for 11-17 year olds remains at £5. Click HERE to buy.

Last meeting: the most recent meeting of the sides was on Saturday 20th April 2013 in the Southern League South & West Division. The Peacocks took a 2-0 lead through goals from Josh Wadham and Owen Irish before the hosts battled back to win 3-2 with two goals from Mark Draycott and one from James Clark