The midweek postponement against Dulwich Hamlet has left Town with some catching up to do, having played only 15 League games to date, the fewest in the division. This is Hemel Hempstead’s 9th season in the National League after they won promotion for winning the Southern Premier in 2014. They currently lie three places higher than the Peacocks in 14th position, three points ahead but having played four more matches. Therefore a positive result at Vauxhall Road has the potential to lift the Peacocks several places up the table but first they will need to negotiate both the Tudors 3G pitch and the hosts’ unpredictable form.

The month of November has produced one win, one draw and two defeats for Hemel, most recently on Tuesday evening when they took the lead at home to Eastbourne Borough before eventually losing 2-1. However the 1-1 draw with leaders Ebbsfleet at the end of last month indicates their capabilities which Head of Football Rob Dray recognizes, saying:” Another massive effort will be needed tomorrow against an established side at this level. After the frustration of Tuesday being off, we need to keep our momentum going in the League and look to pick up points away from home. The postponement at least gave some more time for a few players to get over some niggles but we’re all ready now.” The squad travelling to Hertfordshire is unchanged, with Ollie Chamberlain and Joe Guest ready after recovering from knocks. 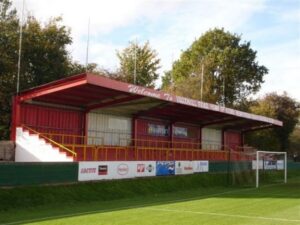 Directions: Exit M25 at Jnct 21 and take M1 North. Exit M1 at Jnct 8 and take A414 towards Hemel Hempstead. Continue on A414 for around one mile before taking right-hand turning into Leverstock Green Road just past the Travelodge. At the second mini roundabout take a left turn into Vauxhall Road and the ground is further down on the right-hand side.

Admission: Tickets can be purchased online in advance HERE or alternatively at the turnstiles.

Last meeting: the sides met most recently in the FA Cup 4th Round Qualifying. After a 0-0 draw at the Cygnet Health Care Stadium, the Peacocks travelled to Vauxhall Road on Tuesday 18th October 2016 and won 1-0 thanks to Jordan Rogers’ penalty.