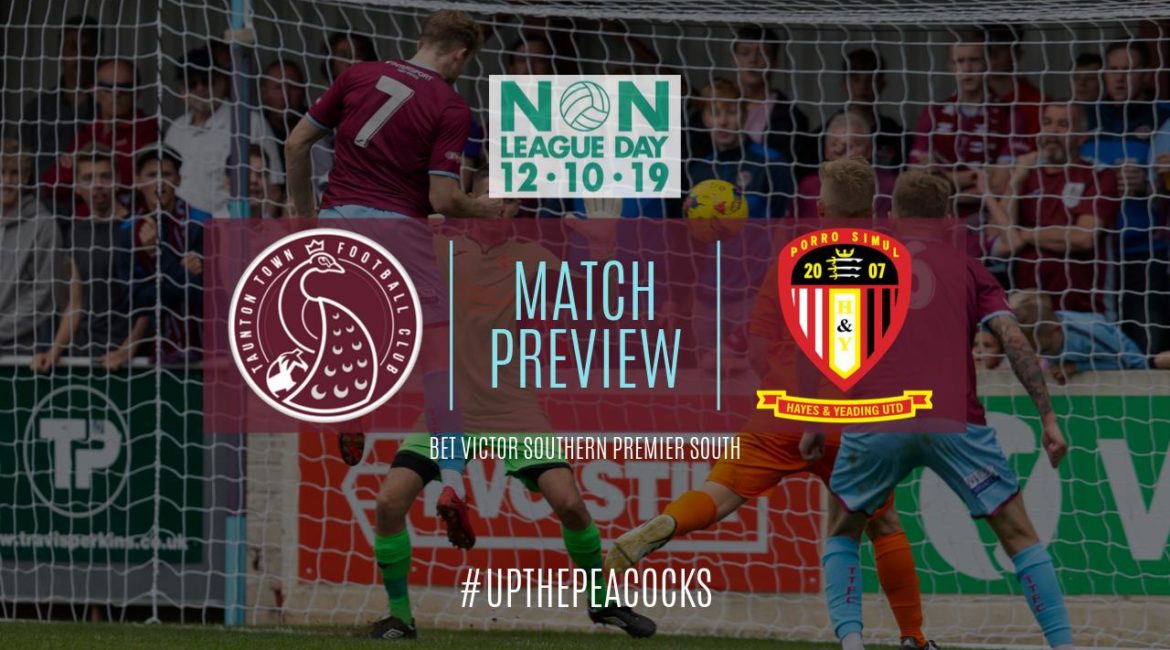 The Peacocks will be aiming to extend their eight game unbeaten run in the BetVictor Southern League when they welcome Hayes and Yeading United to the Cygnet Health Care Stadium tomorrow afternoon (12th October), kick-off 3.00pm.

Last Saturday’s victory over Farnborough made it four wins and four draws for Town since losing their opening two fixtures of the campaign, form which has lifted them up to fifth spot, and they will be hoping to add another three points to their tally against their Middlesex visitors tomorrow to consolidate their place in the play-off zone before tackling two tricky away games in the coming week.

Hayes and Yeading come to Somerset fresh from their 6-0 mauling of Metropolitan Police on Tuesday evening in the Southern League Challenge Cup and having also progressed to the 4th Qualifying Round of the Emirates FA Cup last weekend after beating Hendon 5-4, a result which earnt them a home tie against Poole Town for a chance to make the First Round Proper. Leaguewise United, who won the Isthmian League South Central Division last season by a 16 point margin, have had a mixed bag of results so far, with three wins and four defeats from their nine games, but with only one loss from their last five competitive matches it will be no easy afternoon for the Peacocks.

It will be the first ever meeting between the sides, with tomorrow’s opponents formed as recently as 2007 by a merger between Hayes FC and Yeading FC. However Town did cross paths with Yeading in the 2003-04 season in the FA Trophy 2nd Round, winning the midweek replay in Middlesex 3-1 via two goals from Adrian Foster and one from Mike Booth who also scored in the 3-3 home tie, the other two being notched by Antony Lynch.

The main player news ahead of the game is that wingback Pierce Mitchell has left the club by mutual consent. Head of Football Rob Dray commented:” Pierce naturally wanted to play but with the strength in depth we have in that position it wasn’t going to happen quickly. He’s been a big part of what the club has achieved in the last three years and he’s a top lad so we wish him well.” The club also thank Pierce for his contribution over the past few seasons and wish him the best of luck in the future.

Shane White meanwhile returns to the Peacocks’ squad after completing his three game suspension while centre half Nick Grimes is also fit. Zak Smith though is set to be missing for several more weeks following his injury sustained at Metropolitan Police. Dray continued”: In such an unpredictable league the importance of clean sheets is paramount. This will be the case tomorrow considering the number of goals they have scored in the past couple of weeks, but we are unbeaten in eight league games and we aim to make it nine”.