With the midweek game to Yate having been postponed, the Peacocks will be hoping to resume Pitching In Southern League action when they travel to Hartley Wintney tomorrow afternoon (2nd October), ko 3.00pm.

Last weekend’s 3-0 home win against Walton Casuals was Town’s first success in four matches, lifting them up to sixth place, and they will be wanting more of the same when they make the trip to Hampshire to take on Hartley Wintney who sit in 18th spot, having gleaned eight points from eight games. The Row have had an inconsistent season so far, picking up decent away points with draws at Merthyr and Truro in their opening four games whilst also beating Wimborne before two successive defeats were halted with a fine 3-1 win at Weston-super-Mare last Saturday. However this was followed by a 4-1 home reverse to Beaconsfield Town on Tuesday to maintain their up and down form.

Tomorrow’s opponents were promoted to the Southern Premier for the 2018-19 season, the same time as the Peacocks, and that campaign saw the only two previous meetings between the sides, Town losing 3-1 at the Memorial Playing Fields before sharing the spoils with a 2-2 draw in the return fixture. Head of Football Rob Dray has no new injury worries to contend with after Jake Wannell and Lee Lucas played the vast majority of the Walton Casuals game without concern and there is added good news with the return of Jared Lewington to the squad tomorrow. Jay Foulston though is still absent with a hamstring injury. The Town boss commented:” Mindset will be massive tomorrow. Hartley had a great win at Weston last week, so we know what they’re capable of, meaning we have to turn up mentally prepared for the game and follow up last Saturday’s good result with a performance tomorrow. No match in this division is easy and to make sure we get to where we want to be we have to be fully focused.” 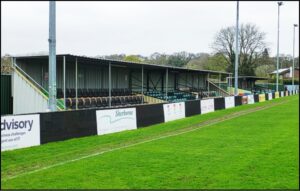