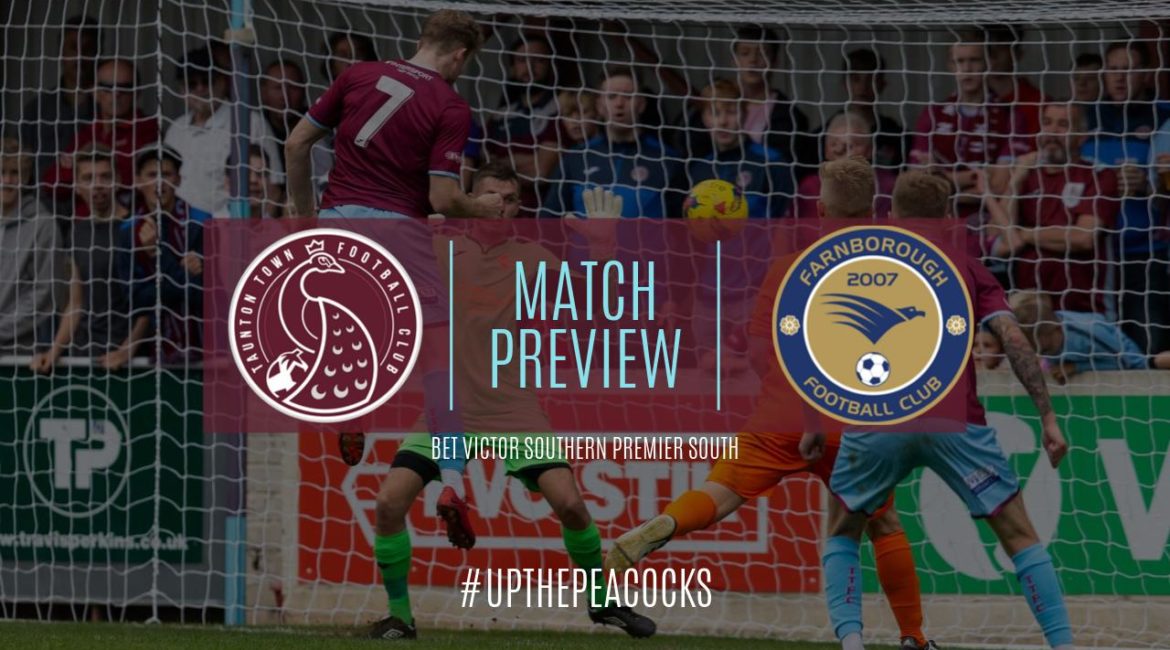 Tuesday evening’s Southern League Challenge Cup victory at Bideford was Town’s first win in five games since defeating Willand Rovers in the same competition a month earlier, having then gone on to draw three league fixtures plus a narrow exit in the Emirates FA Cup. The Peacocks will therefore be hoping that the conclusive win in North Devon will be the catalyst to building a winning run in the league where they have had to settle for a point from their last four outings, most recently at Metropolitan Police last Saturday.

Town will need to beware a backlash from tomorrow’s visitors though with Farnborough experiencing a bad spell after a decent start to the campaign. An opening day defeat to Poole Town was followed by three consecutive wins before the slump started at the end of August, since when they have lost four in a row to slip to 18th in the table. Their two most recent games have seen them ship 12 goals at Cherrywood Road, a 5-0 loss to Wealdstone in the Emirates FA Cup being followed by a 7-0 mauling by Tiverton last weekend. The Hampshire club will therefore be determined to stop the rot tomorrow with a positive result, something they failed to do against the Peacocks last term, with Taunton winning 4-1 away and then a 2-1 victory at the Cygnet Health Care Stadium in February thanks to goals from Shane White and Andrew Neal.

White misses tomorrow as he serves the third and final game of his suspension while Zak Smith awaits the results of a scan on his ankle injury sustained late on last Saturday. Nick Grimes faces a fitness test but fellow centre half Jamie Price is fit to play after being taken off at Bideford as a precaution while Jack Rice and Noah Coppin who both impressed in midweek are also in the squad. Head of Football Rob Dray commented:” Farnborough’s last two results will have no bearing on tomorrow’s game. As we have seen this league is very unpredictable and we have to be focused for every game. However if we play like we have in the past couple of weeks I’m confident this group can deliver.”