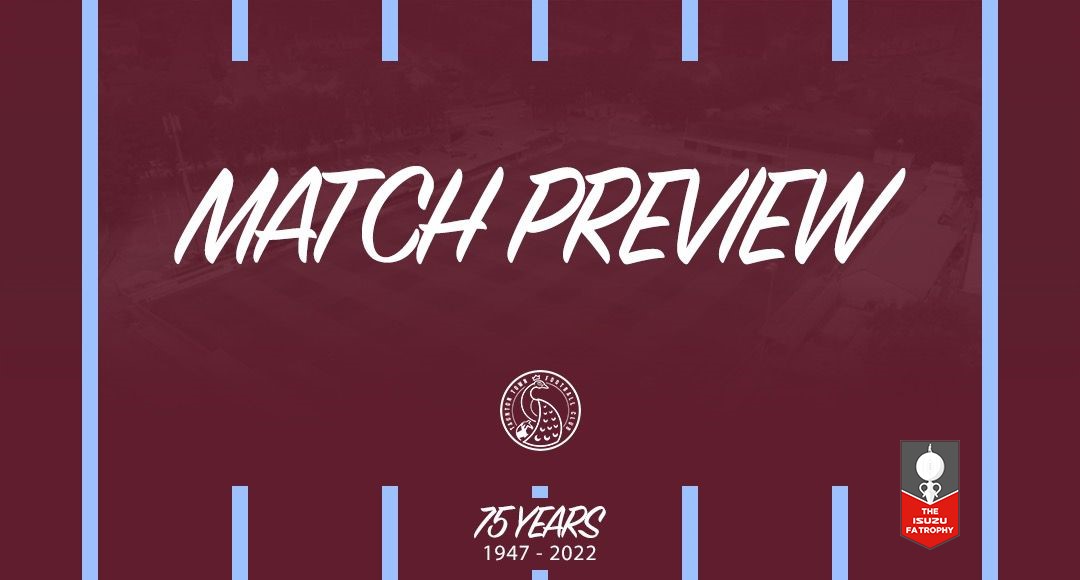 The hope of another run in a cup competition begins tomorrow (19th November) when the Peacocks welcome Dulwich Hamlet to the Cygnet Health Care Stadium in the 2ND Round proper of the Isuzu FA Trophy.

National League North and South sides have been exempt up until this stage but now join the battle to reach the Wembley Final in May and to net the £3,750 prize money for winning tomorrow’s tie which represents the first occasion the sides have met. Hamlet were formerly long-standing members of the Isthmian League, having joined upon their formation in 1907, until gaining promotion to the National League South in 2018. They finished 10th last season but find themselves lower down the table in the current campaign, lying in 20th spot, three places lower than the Peacocks.

The teams will meet again in the National League on Tuesday evening but their primary focus for now is on a competition in which Town have not fared well in during recent years, having exited at the first hurdle three times in the past four years. In fact, they have only won one game in that time, beating Wimborne Town in a replay in the 2019-20 campaign before losing to Aveley in the next round so a run of some sort in the Trophy is long overdue.

The squad is relatively unchanged from last weekend’s Cheshunt match, with the only alteration being the absence of Ollie Chamberlain who won’t be fit after tweaking his groin in that game while Jake Wannell is still a couple of weeks away from selection. Head of Football Rob Dray commented:” The FA Trophy and FA Cup are always priority for me when it comes to cup competitions. Saturday is huge for us as it gives us a chance to make progress in a competition we are capable of doing well in but Dulwich are an established team in the National League and we are well aware we will have to be on our game. We’re playing new opponents who by fate we play again on Tuesday so tomorrow is a great chance to look at them before then.”

All paying spectators tomorrow will receive a voucher which will entitle half price entry to Tuesday’s National League game. Season ticket holders will also receive the same voucher which they can use for a £6 bar spend in either of the TTFC can bars.

Admission is payable by card or cash at the turnstile only, priced at £12 for Adults, £10 for Concessions and £5 for Juniors (14-17 years). Under 14’s are free on condition they are accompanied by an adult. Unaccompanied Under 14’s will not be admitted.

The programme is also available to read online HERE

We welcome our Matchday Mascots tomorrow Galmington Dragons Under 7’s

Last meeting: this will be the first ever meeting between the sides