After getting their first point on the board on their National League South debut last weekend, the Peacocks hit the road for their opening away fixture when they travel to Concord Rangers tomorrow (13th August).

The 0-0 draw with Welling United last Saturday at the Cygnet Health Care Stadium constituted a solid start to life at Step 2 and Town will hope to consolidate further when they make the long journey to Canvey Island tomorrow. The Beach Boys have been members of the National League since gaining promotion from the Isthmian League in 2013 and finished in 14th spot last time around. They made a fine start to the campaign with a 1-0 victory at Hungerford Town last weekend, maintaining their momentum from the latter part of their pre-season schedule when they drew with Dagenham & Redbridge before beating Southend United in their final friendly. It is sure to be a very tough test for the Peacocks then against an experienced side at this level on what will be another baking hot afternoon.

The Peacocks certainly acquitted themselves well on their National League bow and they will be strengthened further tomorrow with the return of Ross Stearn after a spell out with a knee complaint while new signing Dylan Morgan is also included in the travelling squad. Head of Football Rob Dray commented:” Tomorrow is another unknown and difficult test against an established National League side. We have to ingrain how we played last week for each game going forward at this level. We need to be strong from back to front and it was pleasing to keep a clean sheet in our first game. However, we know we can do better and must start to take chances that come our way in order to sustain ourselves in a strong league.” 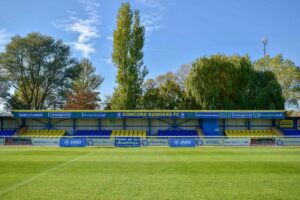 Directions: By Road from the West: Exit the M25 at junction 29 and take the first exit onto A127 towards Southend and Basildon. Remain on the A127 before taking exit for A1245 signposted Chelmsford, Canvey Island A130. The A2145 becomes the A130 and continue until you reach Sadlers Farm roundabout. At the roundabout take the exit signposted to Canvey Island (Canvey Way, A130). At the end of the road, take the third exit at the roundabout on to Canvey Road, and at the next roundabout take the first exit and remain on Canvey Road. Continue forward as the road becomes Long Road, then turn right on to Thorney Bay Road, then right again on to Thames Road. The Aspect Arena is towards the end of the road on your left hand side.

Last meeting: The sides have met on one previous occasion back on 25th November 2017 when the Peacocks sprung a surprise in the FA Trophy by winning 3-2 at the Cygnet Health Care Stadium. Relive the match highlights HERE