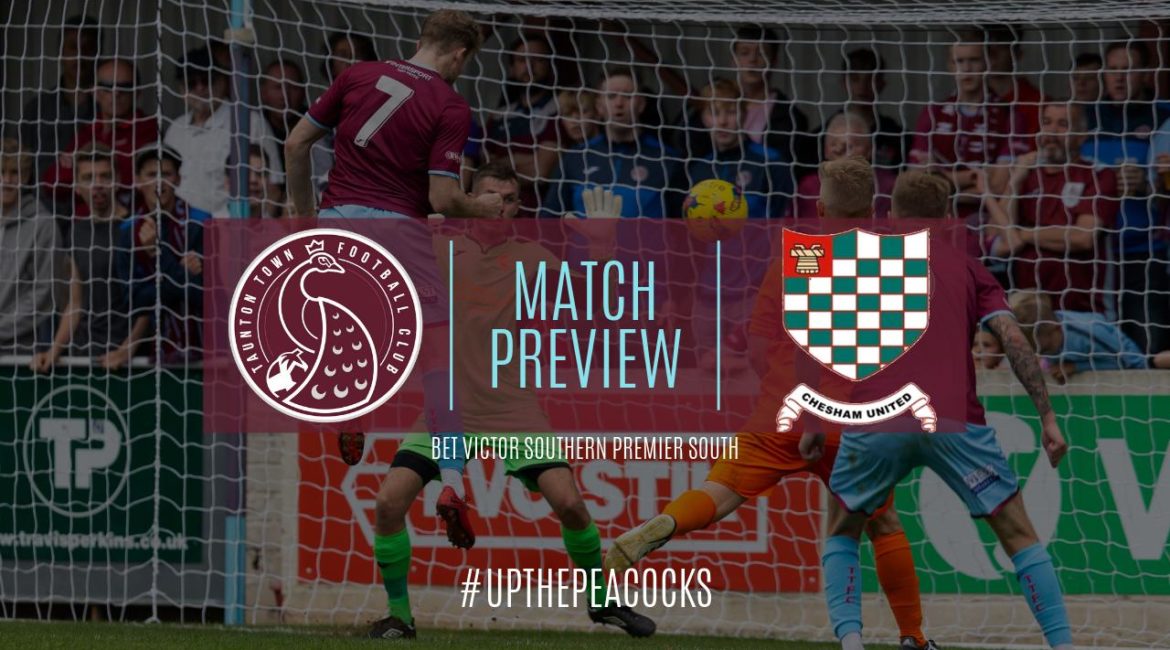 After poor results in their opening two games of the season, the Peacocks will be aiming to turn their fortunes around swiftly when they welcome Chesham United to the Cygnet Health Care Stadium tomorrow afternoon (17th August), kick-off 3.00pm.

The first day reverse at Gosport Borough was followed by a heavy home defeat to Yate Town on Wednesday evening, leaving the Peacocks in the unfamiliar position of being bottom of the table, without a goal to their name and pointless alongside Beaconsfield Town and Walton Casuals.

It promises to be a tough ask for Town though against a Chesham outfit which has a 100% record so far, beating Salisbury 2-0 last weekend before registering a 3-1 victory at Beaconsfield on Tuesday evening. The Generals finished 10th last season, a very respectable position given their early season form which saw them loiter in the lower reaches of the table. However, since Christmas they have lost only twice in 24 league fixtures, their last defeat actually being inflicted by the Peacocks when a Matt Wright goal won the game at The Meadow back in March.

Head of Football Rob Dray names the same squad as Wednesday with the addition of loan signing Harry Kite pending FA approval of the deal. Midfield man Ollie Chamberlain is suspended for one game following his sending off at Gosport last weekend for two bookings.

The first two fixtures have demonstrated that it will yet again be a challenging division this season but at least Town can take some consolation from the fact that they have created a good number of chances in both games. Now the key is to be more clinical and start converting them whilst also tightening up at the back after conceding seven goals already. Dray commented:” I want to see a big response from the team tomorrow. We have performed below the standards we set ourselves so far and we need to do the simple things better and be more effective throughout all areas of the pitch. Chesham have probably been the form team since the turn of the year and will provide us with a very tough game, but we haven’t become a bad side overnight and I want us to show that to our supporters tomorrow who I hope will be right behind us.”