The Peacocks begin their pre-season schedule with a trip to Bitton tomorrow evening (5th July), ko 7.45pm. The game against the Western League Premier Division side gives Town fans their first opportunity to see their team in action since the landmark day of 23rd April when the title was secured on the final day of last season and with it, promotion to the National League South.

With anticipation already starting to mount ahead of the League fixtures being released on Wednesday morning, Rob Dray’s team will look to shake off their summer cobwebs against a Bitton outfit which ended 2021-22 in 13th place in the Western Premier and are captained by former Peacock Charlie Hitchings.

Town will be without centre half Jake Wannell plus new signings Will Tunnicliff and Nat Jarvis who are all on holiday, but the squad will include several new faces including defender Dan Ball and striker Dave Sims-Burgess plus some trialists while there is the welcome return of Ollie Chamberlain and Lee Lucas. 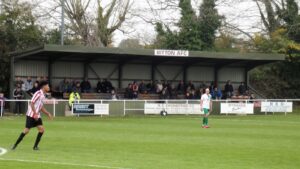