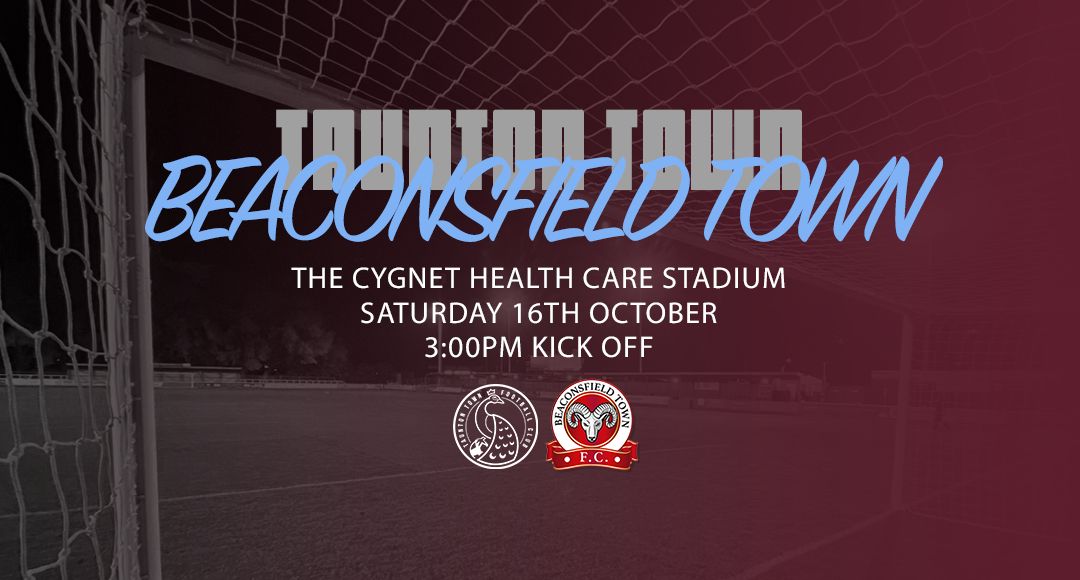 It’s only the third home Saturday fixture of the season for the Peacocks when they welcome Beaconsfield Town to the Cygnet Health Care Stadium tomorrow (16th October), ko 3.00pm.

Town are unbeaten in their last four League fixtures, with two wins and two draws in the past month, the most recent being last weekend’s 1-1 result at Kings Langley so they will be aiming to keep the run going tomorrow to keep them up to speed with the leading pack. The Peacocks sit in 7th spot, one point off a play-off place, with tomorrow’s visitors lying further down in 17th position with 12 points from their 11 games played. The Rams have been forced to play their early fixtures away from their Holloways Park home due to the installation of a new 3G pitch and they started the season well with two straight wins but then lost their next three before gaining a victory at Truro City. However, their last five games since then have yielded just one win, at Hartley Wintney, and four defeats on the road so they will undoubtedly be looking forward to Monday evening when they are finally back at home against Walton Casuals.

Beaconsfield were promoted to the Southern Premier along with the Peacocks after winning the Eastern Division in 2017-18 and on the three occasions the sides have met since, Town have come out on top each time, most recently with a 3-0 home win two seasons ago. A similar result tomorrow would be just the ticket for the Peacocks who welcome back Joe Guest to the squad after a short spell out with a back injury. Jay Foulston also returns after successfully playing the first half against Barnstaple on Tuesday while new signing Conor Hartley is included. However Lee Lucas had a scan today on his knee and Jared Lewington is also having a scan next week, so both are missing along with Ioan Richards who is still not fit for selection. Head of Football Rob Dray said:” Another tough game tomorrow as we have seen in this division. As I’ve said before though, it’s how we turn up that matters. With squads changing readily and with so many player ins and outs, it makes it tough to know what you’re up against each week, so we have to focus on what we do.”

Tomorrow’s game is dedicated to the ‘Taunton Town FC Community Engagement Project Partners,’ many of whom will be present before, during and after the match, individually promoting their respective organisation’s Community Services and in collective representation of the Project. We look forward to welcoming you all and hope supporters will take time to find out more about our guests.