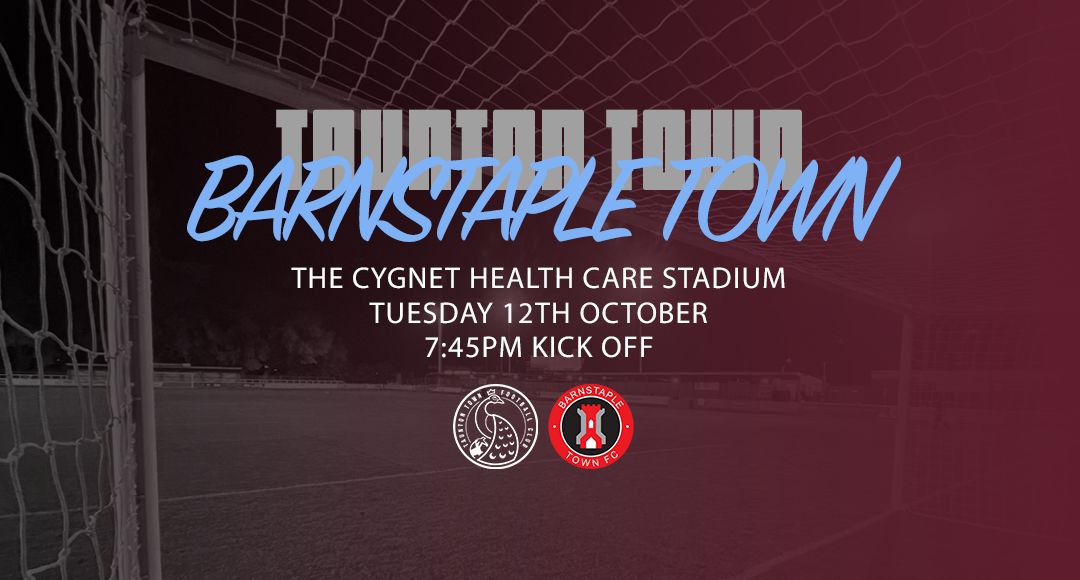 The Peacocks are back in cup action when they welcome Barnstaple Town to the Cygnet Health Care Stadium in the 1st Round of the Southern League Challenge Cup tomorrow evening (12th October), ko 7.45pm.

After the previous week’s defeat on penalties to Ashton & Backwell United in the Somerset Premier Cup, Town will be keen to ensure no further slip-ups against lower league sides as they take on a Barum team who sit rock bottom in Division One South, having lost all eight fixtures to date whilst conceding 37 goals. They have let in 28 of those in their four most recent games which coincided with the departure of manager Dean Edwards, their last league outing just over a week ago being a 9-1 reverse at Larkhall. Their torrid season continued at the weekend when they exited the FA Trophy after a 6-0 drubbing at AFC Totton. Earlier in the campaign, they had achieved their only successes, a 3-1 win at local rivals Bideford in the Emirates FA Cup and a penalty shoot-out win over Plymouth Parkway in the previous round of the Southern League Cup.

The Peacocks also needed spot kicks to progress to this stage of the competition, winning 4-2 on penalties at Bideford in the Preliminary Round. They come into the game unbeaten in their last three league matches and will want to keep the momentum going with another home game coming up against Beaconsfield this Saturday. A strong squad will be on duty tomorrow although skipper Nick Grimes, Joe Guest and Ioan Richards all face fitness tests, while Lewis Smith and Todd Watts from Bridgwater and Taunton College are both added to the squad. It is also hoped that paperwork will be completed in time to sign Ashton & Backwell winger Conor Hartley on dual registration.

Supporters are reminded that there are no advance ticket sales online for this game. Admission has been reduced to half price and payment is by card or cash on the turnstile only. Prices are £5 Adults, £4 Concessions, £2 Juniors (14-17 years) and Under 14’s free accompanied by an adult.