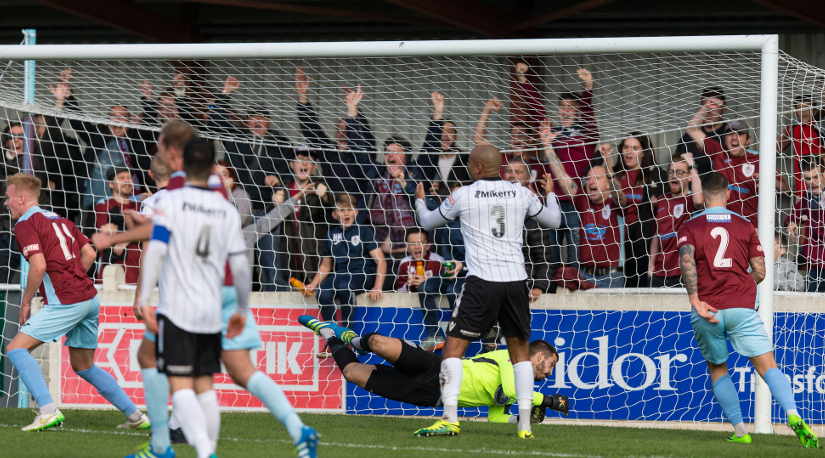 The Peacocks continued their run in the Buildbase FA Trophy with a 2-1 victory over Southern Premier Merthyr Town in the 1st Round Qualifying at the Viridor Stadium yesterday afternoon (28th October).

Town looked fairly comfortable for an hour during which time they built a two goal lead but after the higher ranked visitors pulled one back the hosts were forced to defend for long spells to ensure their progress.

The Peacocks grabbed an early lead after ten minutes when Ben Adelsbury’s free kick was parried by Oliver Davies but Dan Sullivan quickly collected the loose ball and his cross was headed home by Matt Wright. A number of half chances came Town’s way during the rest of the first half, with Sullivan and Ryan Brett both coming close, but they had a let-off seconds before half time when Kerry Morgan’s centre was planted against the bar by Stuart Fleetwood from close range.

Adelsbury doubled the Peacocks lead on 54 minutes, converting a penalty after Morgan had handled Pierce Mitchell’s cross. Wright missed a great opportunity to make it three a couple of minutes later when he got clear and lobbed over Davies but the wrong side of the post. Eliot Richards got Merthyr back in it with a volleyed finish ten minutes later after Town had not cleared their lines which saw the game became increasingly bad-tempered, visiting manager Gavin Williams being sent from the dug-out after barging over Brett.

Lloyd Irish tipped Richards’ free kick wide but despite Martyrs’ pressure the Peacocks stood firm to net the £3,250 prize money and a place in the next round on 11th November.

Reaction | Manager Leigh Robinson remarked:” A really good win against a good side and delighted to be in the next round whilst securing some prize money. It was very much a game of two halves as we were excellent in the first half with the wind but struggled to get out against the wind in the second half but defended with great desire in those difficult conditions.

We had a golden chance to go 3-0 up and were pegged back to 2-1 shortly after but didn’t let this affect us and went on to secure a deserved win I thought. Ironically, the fracas and subsequent five minute stoppage just after their goal really helped us as it disrupted the game and gave us a chance to regroup. Today was a welcome break from league action and the rare opportunity to be underdogs which the lads enjoyed and we’ll look forward now to the draw on Monday.”

Man of the Match Ollie Chamberlain commented:” After a tough game on Wednesday night and not performing the way we would’ve wanted, we were going into the game looking to bounce back with a solid performance, and we certainly did that.

I felt we started on the front foot and took a deserved lead with a great header from Wrighty. Throughout the half we kept the pressure on them and didn’t give them much to work with as I thought our energy was excellent all over the pitch. The only real threat they had in the first half was a chance just before half time but with that staying out and going into half time 1-0 up, it was a big boost for the team. Going into the second half we knew it would be harder as we were against the wind but getting that 2nd goal gave us a good lift.

Merthyr reacted well to be fair and started putting some pressure on which made it difficult for us to get out. When they scored, it gave us an extra 10% because our heads didn’t drop and we kept on battling all over till the last minute. I thought the lads were excellent today against a strong Merthyr team and deserved our win. Now we look forward to the draw on Monday and hopefully another home game.”