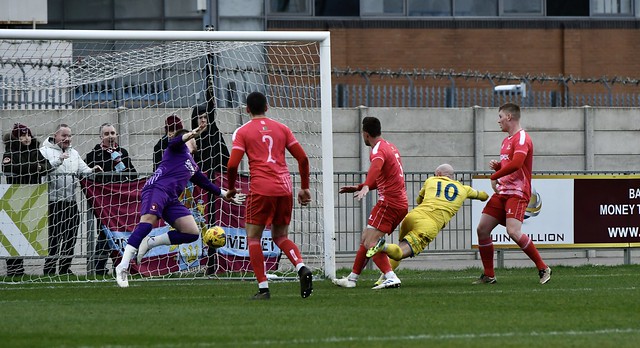 The home side took the lead after 10 minutes through Manny Duku who netted with a shot from inside the area, but Town were level on 23 minutes when a nice move down the right ended with Dan Demkiv heading in Jamie Short’s cross for his first Peacocks goal. Omar Rowe put Hayes ahead again on the stroke of half time, firing home with the outside of his left foot but Town battled back after the break to equalise after 68 minutes when Dan Sullivan headed in Matt Wright’s cross.

Head of Football Rob Dray remarked:” Overall a great point away from home. I thought our intensity and doing the abc’s were better in the second half, we got tighter all over the pitch and really took the game to them in the last twenty minutes. Onto Tuesday where our team will be a mixed side.” More reaction from Rob can be seen on Peacocks TV HERE and match highlights can be viewed HERE