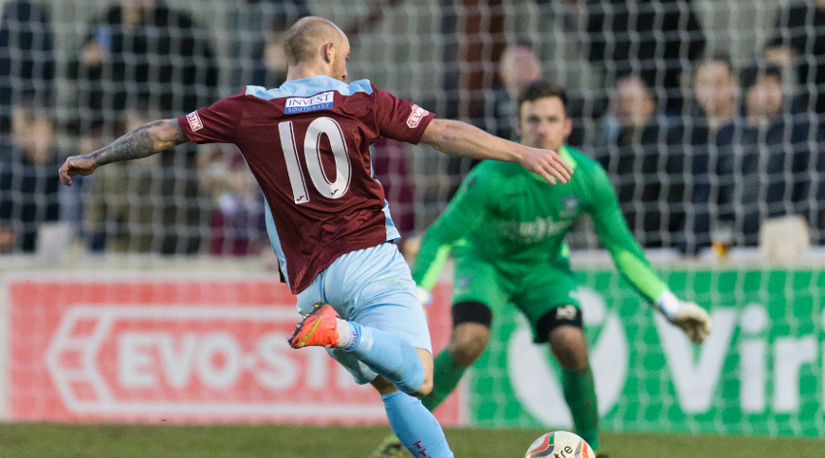 The win was founded on a sublime first half from the Peacocks which saw them return to the dressing room with a 3-0 lead. A quiet start to the game was enlivened by Town’s opening goal after 11 minutes, Ollie Chamberlain breaking to feed Dan Sullivan who slotted clinically past Whites keeper Charlie Searle. More good work from Sullivan created the second score seven minutes later, laying the ball across for Matt Buse to prod home before Town added a third ten minutes before the break, Matt Wright setting up Buse to score his second of the afternoon with a left footed finish. Matt Wright headed in Shane White’s corner three minutes into the second half to make it 4-0 and leave no way back for the visitors who got a consolation penalty on 58 minutes from Owen Howe after Stuart Green had been brought down by Chris McGrath. The Peacocks had long since got the job done though to put them ten points clear at the top of the table.

Reaction | Manager Leigh Robinson commented: “A fantastic win and another good performance to go with it. We wanted to start fast and ask questions of them, knowing that Salisbury were a few defensive players missing and that’s exactly what we did. Our tempo, energy and quality in the first half was fantastic and meant that we essentially had the game won shortly after half time. We were happy in the last half an hour to sit in and try and counter and saw the game out fairly comfortably. A really good day but now is not a time to start believing the hype or take our foot of the gas as we have another test against Cinderford on Tuesday followed by the FA Trophy on Saturday.”

Pierce Mitchell said: “Going in to the game we knew that in terms of the league this was the biggest one of the season so far. We were all confident we could get the win but probably even took ourselves by surprise a little bit when we were 3-0 up after 30 odd minutes. The whole team did their part on the day but the legs and intensity of Dan Sullivan, Matt Buse and Ollie Chamberlain caused them huge problems. A great result for everyone at the club and all the boys are raring to go again on Tuesday!”