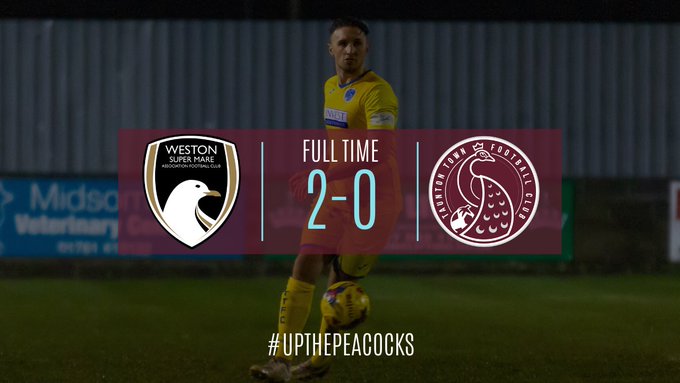 The Peacocks exited the Somerset Premier Cup at the Quart-Final stage when they lost 2-0 to Weston-super-Mare yesterday evening (25th February).

The tie, switched to Keynsham Town’s ground due to a waterlogged Optima Stadium pitch, saw a goalless first half, with Town coming closest to scoring. Weston keeper Luke Purnell made a great save to divert Ollie Chamberlain’s effort onto the bar while Jamie Short’s strike also hit the woodwork. Both sides had chances until Weston broke the deadlock on 73 minutes when James Waite converted a rebound after Lloyd Irish had saved Tom Llewellyn’s shot. Waite then added his and Weston’s second of the night just a minute later with a similar effort which was sufficient to send the Seagulls through to face Hengrove Athletic in the Semi-Final.

Head of Football Rob Dray commented:” Overall last night was pleasing in so many ways after the very late venue change. We were limited on numbers, outplayed them for long periods and I think their keeper Luke Purnell was outstanding. We had to take our chances though which we didn’t but a worthwhile exercise and congratulations to Weston.”