Preview | On Verge Of Record Run 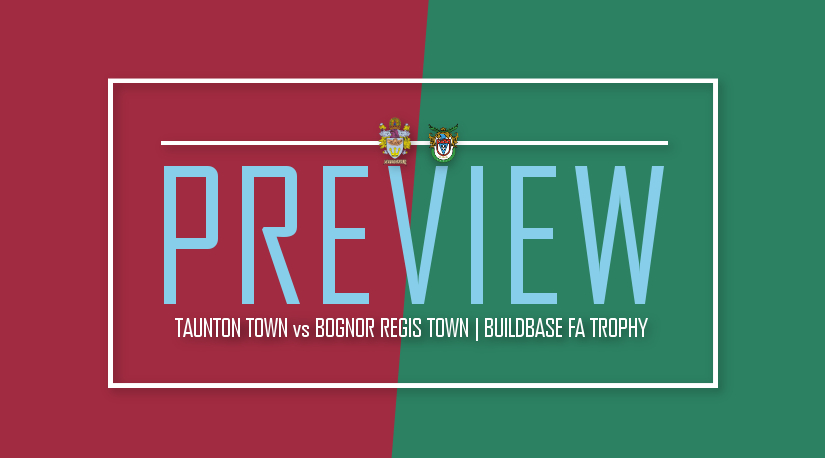 History is in the offing at the Viridor Stadium when the Peacocks welcome Bognor Regis Town in the 1st Round Proper of the Buildbase FA Trophy tomorrow afternoon (16th December), kick-off 3.00pm.

Taunton have reached this stage of the competition (the last 64) twice before in their history, firstly in 1981-82 when they bowed out 5-1 against Hendon and again in the 2003-04 campaign when they lost 3-0 at Worthing in a Third Round encounter in a season when there were no qualifying rounds. Therefore a win tomorrow over the National League South side would signal the furthest Town have ever advanced in the FA Trophy.

They go into the tie on a wave of confidence after a run of eleven league games without defeat and victory over another National League South outfit Concord Rangers in the previous round. However the Peacocks know they will again have to pull out the stops to cause another shock against their higher ranked opponents to secure the £6,000 prize money on offer. Bognor were promoted to the National League for this season after winning the Isthmian Premier Play-Off but have not enjoyed the best of fortunes so far, currently lying one place off the bottom of the table. They have gained just a solitary league win away from home this term, a 2-1 success at St Albans in mid-November which has been followed by two draws and a defeat. However these stats will count for nothing tomorrow when Town know they will have to raise their game significantly from the midweek display against Cinderford to have any chance of progressing. The Rocks of course were fairly recent visitors to the Viridor, coming west two seasons ago for another FA Trophy clash. Despite an early Josh Klein-Davies goal, the Peacocks finished up being well beaten by a 4-1 margin, the start of a run which saw Bognor reach the semi-finals of the competition.

Striker Dan Sullivan is unfortunately missing tomorrow as he is attending a wedding, otherwise the squad remains unchanged from Tuesday. Manager Leigh Robinson commented: “Everyone is looking forward to tomorrow and the chance to create another bit of history by reaching the second round of this competition. Over the last year and a bit we’ve done really well in these fixtures as the underdog and hopefully that can continue tomorrow whilst understanding that we’re up against another really good side.”