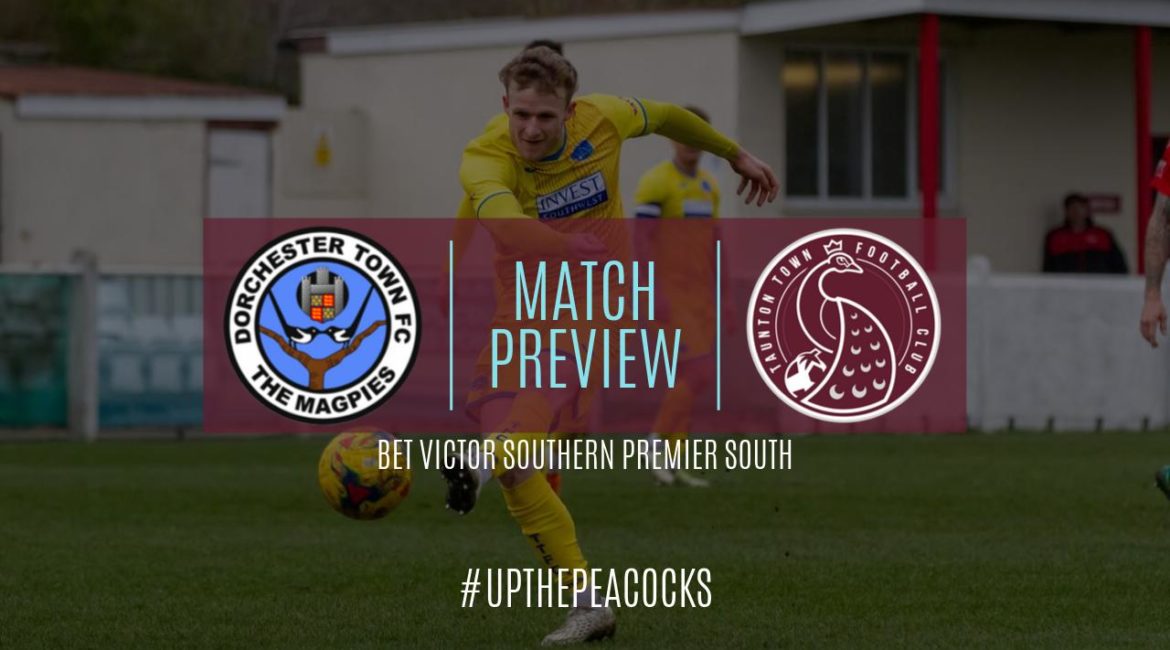 It’s a busy week for the Peacocks as they face two important games starting with the trip to Dorchester Town in the BetVictor Southern League tomorrow evening (17th September), kick-off 7.45pm.

Saturday’s result with Swindon Supermarine was Town’s seventh consecutive game unbeaten, five of which have been in the league which has seen them consolidate a comfortable 9th spot berth, five points behind early leaders Poole Town. However, the Peacocks’ last two league outings have both ended in draws so they will be hoping to turn one point into three at the Avenue Stadium tomorrow.

The 19th placed Magpies have made an indifferent start to the season, winning their opening day fixture against Beaconsfield but then suffering defeat in their next four league games before stopping the rot at the weekend with a fine 3-1 away success at Hendon, their second successive win after beating Evesham United in the Emirates FA Cup the previous Sunday. They will now travel to divisional rivals Blackfield & Langley this coming Saturday in the 2nd Qualifying Round.

Bristol City loanee Bradley Webb is playing for his parent club’s Under 23 side so misses the game in Dorset but Pierce Mitchell is back in the squad after not being included against Superrmarine whilst Nick Grimes is also still available as the suspension for last week’s dismissal against Willand Rovers will not kick in until this weekend pending an appeal by the club. Head of Football Rob Dray commented:” It will be a tough midweek game on astro tomorrow and we will need to maintain our levels for the whole 90 minutes. Saturday yet again showed there are no easy games in this division, and it will be no different tomorrow, so we must approach it in the right way to get a result. Saying that we are seven games unbeaten and in a good place right now, so we go into the game with confidence.”

On The Road – Dorchester Town

Directions: On the approach to Dorchester, follow signs for Park and Ride, turning right onto the bypass. At the next roundabout take the second exit and continue to the next roundabout. The ground is in front of you at this roundabout (junction of the A35 and A354 to Weymouth).

Most recent meetings: The sides met most recently in January with a 1-1 draw at the Cygnet Health Care Stadium, Rocky Neal putting the Peacocks ahead early on before Brennan Camp equalised before half time. Earlier in the campaign, Town had won 2-1 in Dorset courtesy of goals from Craig Veal and Neal which sandwiched Luke Winsper’s effort for the hosts.