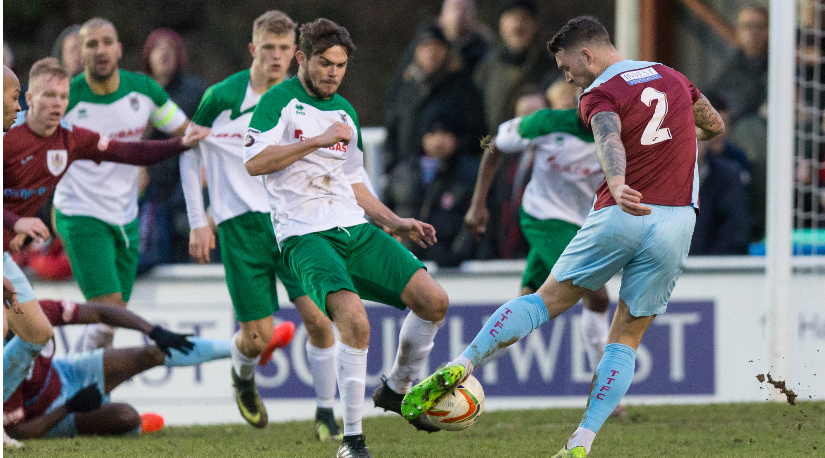 The Peacocks were denied a history-making 2nd Round Proper appearance in the Buildbase FA Trophy when they suffered a 4-1 defeat to Bognor Regis Town at the Viridor Stadium yesterday afternoon (16th December).

The scoreline was harsh on Town who were well in the tie until the final ten minutes when the visitors scored three times. The game swung from end to end during the first half although clear opportunities were scarce. Lloyd Irish saved well from Calvin Davies while Dan Lincoln turned aside a Pierce Mitchell drive before the hosts took the lead seven minutes prior to the break, Matt Wright setting up Les Afful to run through and skilfully fire home. Afful and Omar Simpson came close as the Peacocks made a good start to the second half but after Irish had denied Ibra Sekajja in a one-on-one, the Rocks equalised after 57 minutes when Ben Swallow headed in at the near post from Jimmy Muitt’s cross. Both sides continued to have openings, Chad Field missing the best opportunity for the visitors when he shot wide of the target, before Bognor nosed in front nine minutes from time when Sekajja rifled past Irish from the right side of the box after a slick build-up. Ollie Chamberlain was deemed to have been the last man after a challenge on Sekajja and was sent off five minutes from time and Bognor capitalised. Swallow converted Sekajja’s cross on 86 minutes to make it 3-1 and Doug Tuck had acres of space to drill home a 25 yard shot a minute into stoppage time to seal Bognor’s passage and leave Town to concentrate on their League campaign.

Reaction | Manager Leigh Robinson remarked: “We gave it a really good go today but unfortunately came up short. Probably the key part of the game was the first 15 minutes of the second half when we were on top, had a couple of good chances to go 2-0 up but didn’t take them. We then conceded a bad goal from our own corner and from there the game changed as it became extremely open. Being honest, we did gamble more at 1-1 than we normally would have in a cup tie as we were keen to avoid a replay due to further fixture congestion as well as some of the squad being unable to travel long distances midweek. This led to Bognor scoring a second and from there we were wide open on the counter attack whilst down to 10 men which they exploited well. I think 4-1 was a pretty unfair reflection of the game, we were better than that but there is no doubt Bognor were far more clinical on the day. Another great cup run for us though and thoroughly enjoyable for everyone at the club. We can, of course, now concentrate on trying to get promotion which was always priority number one this year.”