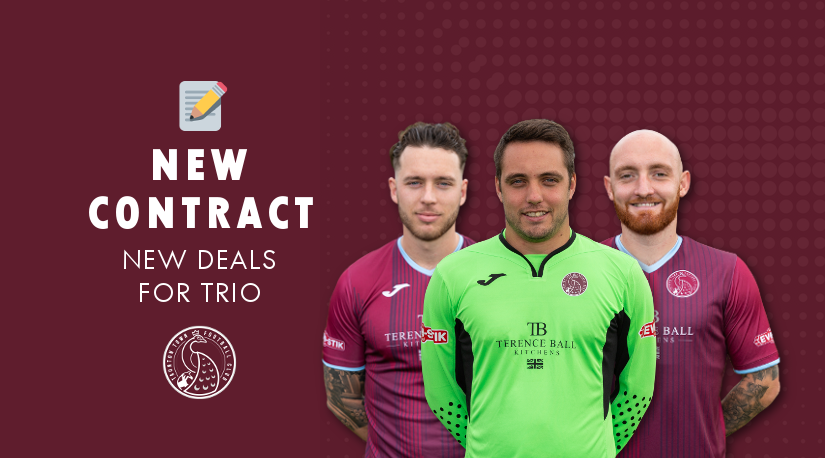 Taunton Town are delighted to confirm Lloyd Irish, Pierce Mitchell and Dan Sullivan have all penned new deals that will keep them at the Viridor Stadium until the summer of 2020.

With the trio now committed to another season at the club, the Peacocks have secured nine of the current playing squad following the announcements of Shane White, Rocky Neal, Ryan Brett, Ben Adelsbury, Ed Palmer and Ollie Chamberlain all committing their futures.

Goalkeeper Lloyd Irish commented, “I’m delighted to have extended my contract at Taunton and it was a no brainer when Drayer and Villis spoke with me. The club is always moving forward on and off the pitch and I’m really enjoying working with Rob and Matt. We have a great bunch of lads here and hopefully we can stick together and kick on. We’re very fortunate to play for such a well run and supported non-league side and I’d like to stay a Peacock for as long as I possibly can.”

Pierce Mitchell added, “I’m really happy to extend my contract for another season. The club has come a long way in the three years that I have been here and I can’t wait to be part of next year’s plans.

Having progressed his plans for the club even further Head of Football Rob Dray said, “This is another big statement by the club. Lloyd year after year saves us so many points and I haven’t seen a better keeper in this league and he deservedly gets an extension for his loyalty to this club.

Pierce’s consistency and quality grows by the game and again like the others he is in the right age to continue to grow with us. He’s extremely popular in the changing room and a top lad to have around the place.

Sully is a magnificent player and gives us that something a bit special. His attitude, work rate and attitude is first class and I’m delighted all three will be with us next year.”