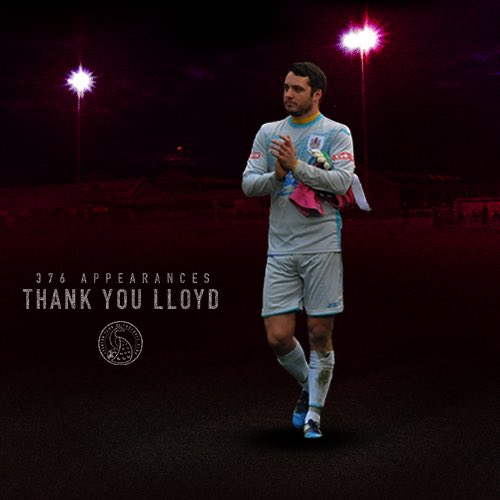 As reported on our SM channels, we can regrettably confirm that goalkeeper Lloyd Irish has departed from the club and signed for Southern League Division One South side Barnstaple Town.

Lloyd will go down as a club icon after amassing 376 full (and one substitute!) appearances for the Peacocks during two spells at the Cygnet Health Care Stadium. He first joined the club as far back as November 2008 when he made his debut alongside brother Owen, another Peacocks stalwart, in a home Southern League match against AFC Hayes. He went on to spend two seasons at the club, during which time he won the Supporters’ Player of the Year award in 2009. After four years at Weston-super-Mare plus short spells at Tiverton and Bideford, Lloyd returned to the Peacocks in October 2014 and was a virtual ever-present, making 239 consecutive appearances from his first game back until missing several matches during 2018-19. His popularity saw him pick up the Players’ Player of the Year award in 2015-16, the season which saw him score his only goal for the Peacocks with a downfield punt against North Leigh to win the game J He retained the Players’ Player award the following season when he also scooped the Supporters’ Player of The Year accolade for a second time. He has saved the Peacocks on far too many occasions to mention, making a whole host of superb and sometimes outrageous saves. His appearances this season have been limited due to time out recovering from a shoulder complaint.

Lloyd told tauntontown.com:” I’d like to thank everyone at Taunton Town for everything over the past 7 years or so. I have memories that will live with me forever. The club is heading in the right direction both on and off the pitch; Kevin Sturmey has done a great job in the time that I’ve been back, and I have no doubt he will continue to push the club in the right direction. Thank you to all the players that I have been fortunate enough to share the pitch with over the years, and a huge thank you to all of the Peacock supporters who supported me and the rest of the team through thick and thin. At 33 I need to be playing so I have made the decision to move on to get game time. A huge thank you to Rob Dray for allowing me to do this. I hope Rob continues to move the club forward on the pitch and wish Rob, Meaks, Villis, Eddy, Tony, Connor and all the rest of the team nothing but the best for the future.”

Head of Football Rob Dray paid tribute, remarking:” Rarely do you get a chance to work with proper club legends like Lloyd. His stats are phenomenal, his commitment and longevity are outstanding. I can’t say a bad word about him, we’ve had some fantastic times with memories that will last a lifetime. He is without doubt the best keeper to come out of the area in the last decade or more and he will be a massive miss, but Lloyd wants to play more regularly, and we appreciate that.”

We would like to thank Lloyd for his outstanding service to the Peacocks and wish him the very best of luck in his new challenge. We look forward to seeing him visit the Cygnet Health Care Stadium soon!