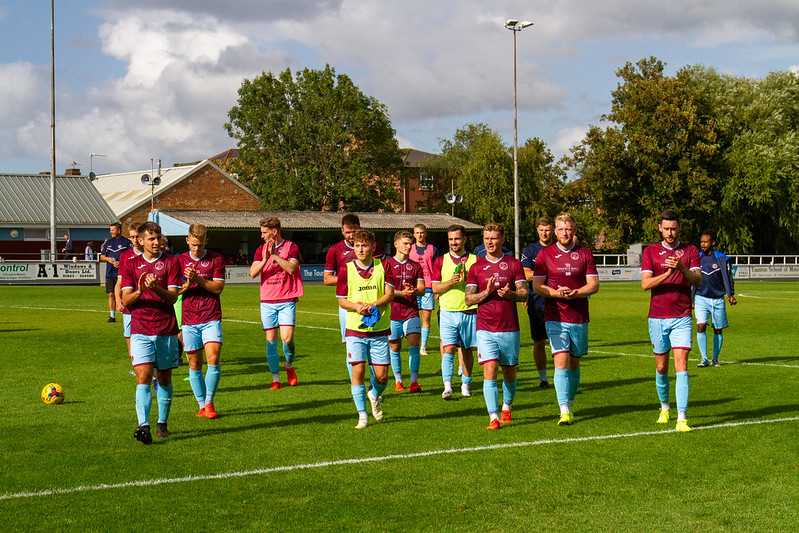 After two defeats it was third time lucky for the Peacocks who deservedly gained their first win of the campaign when they beat Chesham United 3-2 at the Cygnet Health Care Stadium this afternoon (17th August). It was a much improved performance from Town to secure the three points to take them off the bottom of the table.

Chesham, only beaten twice in 24 league outings, were first to show, taking the lead after 12 minutes when Eoin Casey headed in from on the line after Mark Kirby had hooked the ball back in following a free kick. Town were on terms a minute later, Matt Wright netting from Shane White’s corner for his side’s first goal of the season, before they went ahead on 34 minutes with a great team goal ending with Lewis Hall delivering a perfect cross from the left for Wright to drill home the Peacocks’ second into the roof of the net.

Town were looking comfortable into the second half before a goal out of the blue drew the Generals level just past the hour, a long Ryan Phillips throw being miscued into his own net by Jamie Price. However Town responded in the best way possible by retaking the lead with 20 minutes remaining, debutant Harry Kite converting White’s corner from close range. Keeper Ben Goode denied Ryan Brett a fourth goal for the Peacocks before home stopper Lloyd Irish preserved the points in stoppage time with a tipover save from a Jefferson Louis strike.

Reaction – Head of Football Rob Dray said:” It was great to get a deserved win. Our intensity out of possession was so much better and scoring goals changes games, but we still have things to work on so we kick on to Tuesday at training and then a big weekend of two games. We keep our heads down, stay humble and keep working. Special mention to Zac and Harry who at such a young age showed great maturity and made a big difference yesterday.”