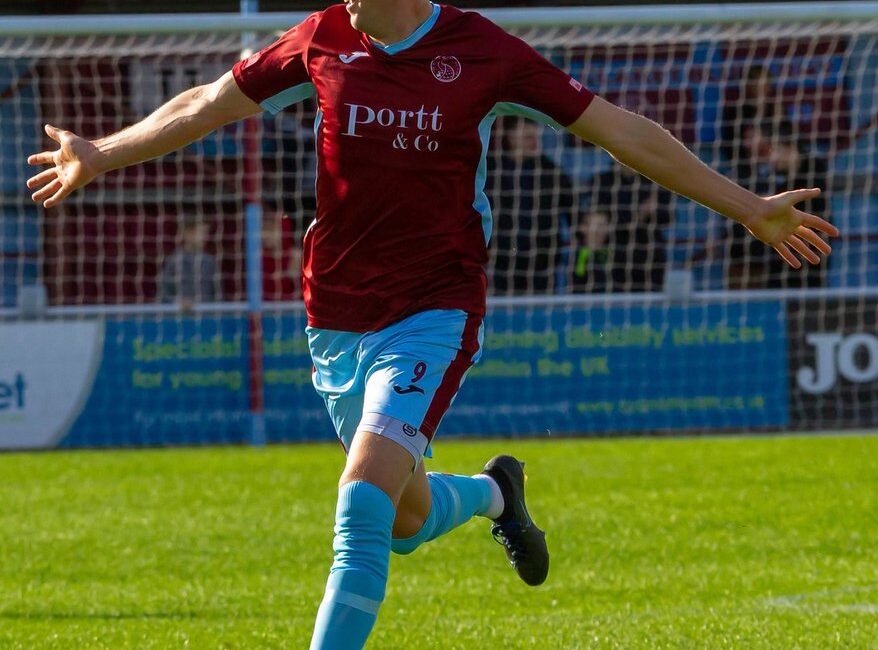 We can confirm that Toby Holmes has decided to leave the club after two very successful seasons with us.

The striker joined the Peacocks from Salisbury in the summer of 2020 and made an immediate impact in claret and blue, netting 11 goals from just 11 appearances before the season was curtailed due to Covid. He continued finding the net on a regular basis during our title-winning campaign, scoring another 21 goals from 38 full and 9 sub appearances to finish as the club’s top goalscorer for 2021-22. However with the increased demands of National League South football and with a new addition to the family, he is unable to commit.

Toby told tauntontown.com:” I just want to say a massive thank you to everyone connected to the club for the support over the last couple of seasons. I’m happy to have played a part in creating history for the club but couldn’t have achieved it without such a great group of players, management team, staff, volunteers and of course the fans. Unfortunately I won’t be able to commit to what’s needed next season and that is the only reason I’m leaving. Taunton is a fantastic community club and I know the changing room feeds off the amazing support. Get behind the club and the boys next season and I’m sure they will be more than alright. Thanks again.”

Head of Football Rob Dray added:” Toby came into the club and did what he does best, scored goals. Aside from that he’s been one of the easiest players I’ve had to manage and a really great lad. I respect his decision to cut the travelling down and play more locally after his family circumstances changed but he’s been part of a history-making team and that can’t be taken away from him.”

We thank Toby for his efforts whilst with the club and wish him both the very best of luck in the future.