The Peacocks’ second appearance of the season at the Optima Stadium produced the same unsatisfactory outcome as they were knocked out of another cup competition by their League rivals. In contrast to their previous visit when they were thumped in the FA Cup, at least on this occasion Town were fully in the tie, ahead at the interval before the home side restored parity. The Peacocks retook the lead despite being a man short after Gethyn Hill had been sent off, but the Seagulls turned the tables to edge through and claim the £2,450 prize money.

With Ollie Chamberlain and Ross Staley both absent through injury, Ben Adelsbury and recent signing Josh Thomas came into the starting line-up but with Halloween one day away, early activity focused on the scary decision-making by referee Craig Scriven who had brandished three yellow cards in the first ten minutes, setting the tone for what was to follow. Initial exchanges were scrappy with neither side keeping any sustained possession, Town offering the first attempt when Hill found Dan Sullivan who shot over from outside the box.

A free kick from Lloyd Humphries hit the wall at the other end, however goalscoring opportunities remained elusive until Town grabbed the lead after 22 minutes, Sullivan’s corner into the six yard box being met by Jake Wannell’s header which found its way over the line past Weston’s loan keeper Max Harris. The Seagulls first real chance arrived when Jordan Bastin whipped in a free kick to the near post, but James Dodd was unable to direct his header on target, then Nick McCootie fed Bastin whose dangerous cross was pushed away by Will Buse.

It was the Peacocks though who somehow were deprived of a second goal ten minutes before half time. Jay Foulston’s corner was cleared and when he received the recycled ball from Sullivan, his cross to the far post was nodded down by Nick Grimes, only for the ball to become lodged in a group of players, Wannell’s attempt being blocked, and Toby Holmes’ effort kept out by the arm of Nathaniel Williams. Penalty appeals from the Town players were dismissed and Weston had escaped a bullet. The visitors maintained the pressure, Foulston’s shot being deflected over for another corner from which Adelsbury saw a header blocked and a follow-up eventually gathered by Harris.

After the game was stopped to allow treatment for Zac Smith, his side resumed their quest with Hill playing Holmes through on the right, but his shot was wide of the far post. Buse then had to be awake to make sure the Peacocks retired for the interval with the advantage, McCootie connecting with Scott Laird’s cross to force the Town keeper into a diving stop.

Smith was unfortunately not fit to return for the second half and Jack Veale came on to replace him. Only four minutes had elapsed though before the hosts drew level when a group of players challenged for Bastin’s corner from the right, the ball diverting off Hill to find the corner of the net for an own goal although McCootie was initially credited.

Town pressed forward as they looked to bounce back from the rather soft equaliser. Holmes benefitted from a stray pass to advance but couldn’t get a clear strike at goal, then Thomas saw a shot deflect wide while Hill placed a header over the top from Sullivan’s corner before the complexion of the game changed midway through the half when, following a break in play to allow treatment for Weston’s Williams, Hill was shown a second yellow of the afternoon for dissent and Town were down to ten men.

Despite being a man short, the Peacocks went on to regain the lead on 70 minutes. After Holmes had seen his effort grabbed by Harris at the second attempt, a Sullivan corner found Wannell whose header was cleared off the line by Sam Avery, the rebound falling perfectly for Wannell to volley home for his brace. Frustratingly though the lead was short-lived. A Weston break two minutes later saw Dodd feed Laird on the left side of the box and his driven cross took a deflection off Taunton’s Thomas and travel under the legs of Buse to bring the hosts level again.

The second equaliser gave the Seagulls that extra momentum, Bastin curling a shot wide after Jay Murray’s corner had been cleared before Town had their last real opening of the tie when Thomas headed over from Foulston’s free kick. The winning goal came on 84 minutes, Laird in acres of space down the left to make ground and drill a left-footer into the far corner from 20 yards past the despairing dive of Buse. The remainder of the game which included five minutes of stoppage time saw Weston comfortably maintain their lead with Town unable to conjure up any meaningful response as their poor recent record in the FA Trophy continued, having won only one tie in the past four seasons.

” Even with 10 men I though we were good, but we switched off for that minute…” watch Rob Dray’s Match Reaction on Peacocks TV HERE 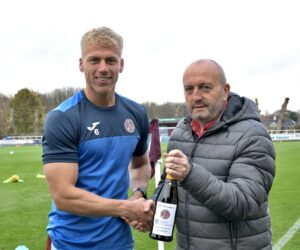