An uninspiring performance from the Peacocks led to their FA Cup downfall after they were dismissed from the competition by their Southern League rivals. Holding a 3-0 lead at the break the tie was settled in the home side’s favour minutes into the second half when they added a fourth and although Gethyn Hill got Town on the scoreboard just past the hour mark, a miraculous comeback never appeared likely, and the Seagulls rounded off their comfortable passage with a final goal close to the end.

Town’s fifth successive away match saw changes made after the midweek game at Poole, with Lee Lucas, Ioan Richards and the unavailable Khari Allen replaced by Ben Adelsbury, Jack Goodall, and Ross Staley. And the early exchanges gave no hint of the calamity to follow as the visitors made a brisk start, Joe Guest heading forward to Ollie Chamberlain who yanked a volley wide of the target while Hill had an effort blocked.

It was Weston though who grabbed the lead after 12 minutes with their first chance. Will Buse blocked Scott Laird’s driven cross at his near post to concede a corner and when Dayle Grubb’s delivery was only partially cleared to Lloyd Humphries, he set up Will Turner to launch a ball back into the box where Laird’s well-executed hooked volley found the far corner of the net. Grubb had a shot blocked soon after before the Peacocks responded when Guest won the ball, allowing Toby Holmes to turn and fire narrowly over the bar from the edge of the box.

However Weston were quick to strengthen their grip on the tie with a second goal on 19 minutes. And it was another set piece that caused the damage, Bastin’s corner from the right being glanced home at the near post by Laird for his second goal of the game. A break from Chamberlain forced Turner to hammer a clearance over his own crossbar with Hill waiting before the Seagulls all but settled the outcome with a third goal on 29 minutes. And yet again it was a corner, this time Bastin crossing low to the near post where Humphries’ volley was adjudged to have crossed the line after taking deflections off Buse and the post, despite protests from the Town players. Photographic evidence confirms the claims are valid as the ball did not cross the line but in the absence of VAR……

There was little to enthuse the travelling support up to the break, Town still not convincing at the back against the Weston front line while struggling to create much going forward, Zac Smith’s free kick winning a corner which Sullivan sent straight out, summing up a lacklustre first 45 minutes for the Peacocks. Unfortunately, the outlook failed to improve in the second half. Grubb drilled a centre across the face of goal before he notched the fourth goal of the afternoon on 48 minutes, Jay Murray getting free on the right to beat the defender and tee him up to fire home from 15 yards for an all too easy finish.

The Peacocks at least created some chances after the break, being presented with a wonderful opportunity to reduce the arrears when Goodall’s ball over the top found Holmes who rounded Weston’s debutant keeper Kie Plumley and rolled the ball towards the open net, only to be denied by Sam Avery’s last-ditch clearance. A similar scenario occurred at the other end when Bastin capitalised on a mistake to get past Buse but couldn’t find the target from a tight angle.

Town did pull a goal back after 62 minutes when Sullivan latched onto Hill’s flick but was adjudged to have been fouled by Turner. Hill stepped up to rifle home the penalty and score for his sixth consecutive game. The best move of the match for the Peacocks nearly yielded dividends soon after, Sullivan’s dummy from Smith’s pass releasing Holmes on the right but Plumley kept the shot out with his legs.

Buse parried James Dodd’s angled strike as the hosts continued to be the more incisive side, Town wasting another opening when Holmes beat his man on the left and crossed into Sullivan who fired well over the top from six yards. Goodall’s header from a Staley corner was also blocked as the match went through the motions until its conclusion. Adelsbury cut out a run from Turner as the Weston defender threatened to run through the entire defence before Weston rubbed further sea salt into the wound with a fifth goal on 88 minutes, Grubb in space down the right playing a square pass to Humphries whose first time strike from 18 yards beat Buse to find the net. Sullivan volleyed over and Lucas Vowles’ shot was parried by Buse during four minutes of stoppage time which thankfully seemed much shorter. 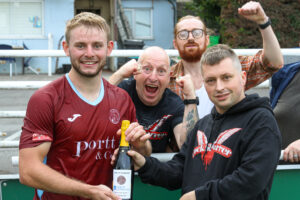