The two sides conjured up a repeat scoreline from the corresponding fixture last season when the Peacocks again had to come from two goals down to rescue a point. Although Town took the lead midway through the first half, they went on to concede three goals inside the opening 45 minutes but to their credit battled back after the break to draw level.

Yet more rain during the day had made the Cygnet Health Care Stadium pitch very soggy but playable thanks to the efforts of the grounds team. The opening 20 minutes of the game were also something of a wet lettuce, with barely anything of note to excite the 378 crowd, the lowest League attendance at home this season. That all changed after 22 minutes when the Peacocks grabbed the lead. Dan Demkiv, making his first home appearance since signing a month ago, darted past his man on the left touchline and when his ball across reached Harry Kite, the Exeter man made space to fire a fine strike from the edge of the area past Jonathan North who could only help it into the net.

Hopes that this first effort on goal from either side would build the foundation for Town to go on to claim victory were rudely dispelled in the next quarter of an hour. The North London side were only behind for three minutes, a Luca Allinson shot from the right being deflected into his own net for the equaliser by Town centre half Nick Grimes as Joe White waited to pounce. A misjudged bounce then gave White the chance to break away from his defender on the left and after exchanging passes with Percy Kiangebeni drilled home the visitors’ second goal of the night off the underside of the bar from 12 yards.

The outlook became worse on 36 minutes when Town conceded a third. The tricky Lucien cut inside for a strike which crashed off the bar and when the Peacocks dithered Olarerin tried his luck with a shot from the right side of the box. The attempt wasn’t clean and 99 times out of 100 Lloyd Irish would have saved with comfort. However on this occasion it proved the one time it wouldn’t happen as the Town keeper failed to collect the scuffed effort which bounced off his foot and hit the back of the net.

Town attempted a response attacking the Invest Southwest End before the break but without success. Matt Wright met Jamie Short’s cross with a first time shot which travelled just the wrong side of the post while Luke Spokes did well on the right to deliver a cross which Demkiv flicked goalwards but was cleared off the line.

The hosts knew they had it all to do when the second half resumed. Sullivan hit a shot over the top from Demkiv’s ball in while Wright powered a header the same way from Ryan Brett’s cross. Shane White’s centre was then too high for Demkiv at the far post before the Peacocks had to thank Irish for preventing Hendon from extending their lead further. A breakaway saw Kiangebeni release Lucien and he found White in the box who was denied by Irish who made a crucial block.

Town continued pressurizing and pulled a goal back after 62 minutes, Short getting free on the right and squaring into the middle where Wright planted the ball over the line from close range. Ollie Chamberlain came off the bench to replace Demkiv as Short saw another shot deflect for a corner and then Dan Sullivan’s rasping drive was blocked. An advantage played following a foul on Chamberlain very nearly turned into a disadvantage though when the Dons broke away culminating in a shot which hit the side netting.

Still the openings came for the Peacocks as the encounter entered the final stages. Brett’s free kick was met by Jamie Price’s header which seemed to be tipped over by North, but referee Kane decided otherwise, and a goal kick was given, then Short’s cross was only half cleared as far as White, but his shot was deflected for another corner. The pressure told with nine minutes left, White sending in a cross from the right side and Wright headed firmly home at the near post for the equaliser and his second goal of the evening to match the brace he scored in the same fixture last season.

Chamberlain so nearly notched a late winner, slotting Short’s centre towards the far corner but the ball spun past the post. Six minutes of stoppage time saw both sides search for the winner but neither could create the knockout punch as the game finished all square. The Peacocks had done well to fight back to gain something from the contest but whether it represents a point won or two dropped against an understrength Hendon side will become clear once the league campaign has concluded. 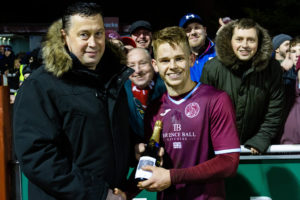