A forgettable evening at a gusty Bolitho Park as a poor quality match on a boggy pitch went City’s way to gain some recompense for two defeats earlier in the season. Missed chances in the second half ultimately cost the Peacocks dear as they suffered their first reverse in seven Southern League outings but with rivals Farnborough also losing, Town still have the destiny of automatic promotion in their own hands.

With Head of Football Rob Dray and Assistant Matt Villis both away, Coaches Michael Meaker and Connor Sidley-Adams took charge of a Peacocks side showing two changes from the weekend scrape against Weston-super-Mare, Ioan Richards coming in for the injured Jake Wannell and Jared Lewington swapping places with Toby Holmes. The hosts, who are still in with a chance of claiming the fifth play-off spot after this narrow win, started off brightly. Charlie Madden’s cross evaded the defence to find Alex Battle on the left and he drove a shot across goal and then Niall Thompson’s strike was blocked, the loose ball falling to Battle who blasted over the top before Town keeper Will Buse tipped away Rio Garside’s cross.

The Peacocks began to grow into the game with their first opportunity coming on 18 minutes when Lloyd James swung in a free kick which Gethyn Hill glanced goalwards, only for City shotstopper James Hamon to make an instinctive stop and Lewington’s shot from the rebound kept out by Owen Maiden on the line. The home side were playing the brisker football though and kept Town busy with some pacy breaks, Rocky Neal releasing Thompson, but Buse was there to block. Lewington headed wide from Zac Smith’s cross although the flag was already up for offside while Joe Budd’s shot was closed down and a Jay Foulston free kick went straight to Hamon as the visitors had some openings leading up to half time. City though might have returned to the changing rooms with the advantage, Thompson turning the defence in the box to fire inches past the far post.

Urged on by a sizeable away following, the Peacocks remained out of luck in front of the goal after the break, Lewington directing his header from Smith’s cross well wide of the target while Battle ran in to connect with a corner at the opposite end, his effort going wide. Budd was brought down just outside the box to earn Town a free kick, but any hopes Ben Adelsbury would repeat his pearler from the previous games were dashed when he fired narrowly past the post.

The White Tigers were finding space easier to come by and after Buse had gathered a deflected Connor Riley-Lowe cross, the hosts grabbed the only goal of the night on 63 minutes. Battle found Thompson out on the left and the Town defence were slow to close down as the Truro No 2 made room to curl home into the far corner from 18 yards. The Peacocks needed a response but found it difficult to get much tempo or intensity into their game. Holmes replaced Lewington to try and pep things up and after Hamon had collected Hill’s flicked header from a James cross, another chance went begging when a James free kick fell loose, Adelsbury headed on and Richards’ lunge at the far post steered the ball the wrong side of the post. Two minutes later and Town rued another missed opportunity when Holmes burrowed his way through the Truro defence and found himself with just Hamon to beat but the goalkeeper came out on top as he blocked the striker’s effort.

Truro conjured up the odd late opening, a reaction header from Garside flashing across goal and Battle sending a dipping strike over the bar before Town’s last real chance came from a late corner which was cleared as far as Joe Guest whose shot was safely clutched by Hamon. The dismissal of Stewart Yetton from the Truro bench raised a few cheers from the travelling faithful who left Plymouth disappointed after a flat performance from their team. Extra zip and efficiency in front of goal will be required for the next assignment against major rivals Metropolitan Police to ensure Town keep in contention for the title.

Goalkeeping coach Connor Sidley-Adams commented:” Obviously the result didn’t go our way but throughout the game we’ve created three or four very good chances that on another day go in and we win the game comfortably. Their goalkeeper has made some good saves where in weeks gone by those chances have been going our way. It doesn’t really change how we approach the next four games, the boys are clear what these games mean and what the outcome will be off the back of these four ‘cup finals'” 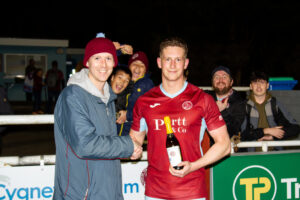