Another controversial refereeing decision proved pivotal in this well-contested FA Trophy tie which represented the first ever competitive meeting between the clubs. After going two down to the National League outfit inside the opening 20 minutes or so, prospects appeared grim for the Peacocks, but they showed fantastic spirit to fight back and draw level. However the dismissal of Jake Wannell minutes before the interval left Town with an uphill battle for the second half which ultimately proved a step too far against their full-time opponents.

There was one change for the visitors from the Dover game seven days previously, Nick McCootie coming in for Dylan Morgan, and all began well enough, with Town winning the opening corner of the game from Lloyd James which Gulls’ keeper Mark Halstead safely caught. The hosts though soon started to test the Peacocks’ defence which blocked off a Nico Lawrence shot and then saw Ben Wyatt bundle wide at the back post from Dillon De Silva’s cross.

A long ball from James gave McCootie the first real sight of goal for Town but his volley flashed across the box rather than at the target. However it was Torquay who were increasingly threatening and came close when Tom Lapslie advanced to fire a shot narrowly past Jack Bycroft’s right-hand post. A minute later on the quarter hour mark the Gulls were ahead, De Silva gliding in from the right rather too easily and picking out the far corner with a fine curling effort. And it took only six more minutes for United to double their advantage after Shaun Donnellan’s free kick into the box found Lawrence who flicked on for Ali Omar to plant a routine header beyond the rooted Bycroft.

Two goals down with 75% of the contest to play did not bode well for the Peacocks, playing only their second game since Boxing Day. But just like a fighter put down twice in the early rounds, Town got to their feet and landed some punches of their own to leave it equal on the judges’ scorecards. The deficit was reduced after 26 minutes when a ball from Nick Grimes was flicked on by Nat Jarvis to Stearn on the edge of the box and he squared across to the unmarked McCootie on the far post to slot home into the far corner.

The visitors menaced again when a low cross from Jarvis was parried away by Halstead and scrambled clear until Wannell took the spotlight in the final stages of the opening period. Firstly a great clearance prevented a nod-on from a free kick finding Ali Omar at the back post before the Peacocks’ centre half brought the teams level seven minutes from half time. A James’ free kick from deep found the head of Jarvis and fell to Wannell who took a touch and prodded past Halstead from ten yards to the euphoria of the travelling support at the opposite end.

A neat build-up nearly brought an immediate response from Torquay, Lapslie seizing the ball inside the box to round Bycroft but finding the side netting before the turning point of the tie arrived on 43 minutes. Wannell’s challenge for a high ball which caught Kieron Evans in the process was unbelievably deemed a red card offence by referee Tallis and to the disbelief of the Town camp they were down to ten men. Evans, who had made a very speedy recovery from the incident moments earlier, dragged a shot wide and sent another tame effort straight to Bycroft as the first half ended all square.

Despite their numerical disadvantage, the Peacocks opened on the front foot when play resumed but they were unable to carve out a clear chance. Several free kicks into the mix found the head of a Gulls’ defender while Joe Guest’s lofted pass found McCootie in space on the left, but his first-time lob was over the bar. The home side gradually got back into gear and began to up the ante on the Town defence who coped well with a number of deliveries into the box and blocked several attempts at goal. Morgan replaced Stearn on the hour to add some fresh legs, but this did little to shift the momentum, De Silva’s strike caught by Bycroft who then dived to palm away a swerving drive from Ricky Aguiar. The pressure paid off on 65 minutes when United regained the lead, Wyatt beating his man down the left to cross for Aaron Jarvis to direct a header into the far corner. Six minutes on and the Torquay No 9 effectively sealed his side’s progress to the next round and a home tie with Barnet. A penalty was awarded for handball by James as he tried to block a shot from Jarvis who stepped forward to send Bycroft the wrong way from the spot.

The remainder of the game proved fairly uneventful to what had gone before as Town stood firm. Dave Sims-Burgess and Lee Lucas took over from McCootie and Jarvis during the final 15 minutes while Bycroft held a shot from Evans. There was a late opportunity for the Peacocks to pull one back when Ollie Chamberlain’s floated cross from the right found Guest running in at the far post, but he placed his header wide.

A case of what might have been had Town played the whole game with a full complement but regardless they had put up a good fight against a seasoned team. The hunt for National League South points now becomes the primary focus as the Peacocks look to utilize their games in hand and climb the table.

“The turning point was definitely the sending-off which was very close to me and it was not a red……..” watch Rob Dray’s Match Reaction on Peacocks TV HERE

Match highlights can be seen courtesy of TUFC TV HERE 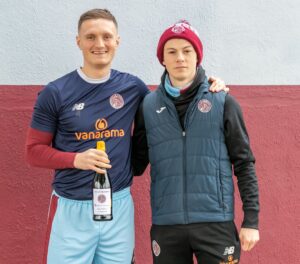