The Peacocks are still waiting for their first win over the Kent side after being comfortably dismissed from the Emirates FA Cup at the final qualifying stage. In four previous meetings between 1977 and 1979, Town had been beaten three times and this game at a wet and windswept Longmead Stadium saw the visitors fail to improve on that record.

The scoreline doesn’t tell the whole story of the game, with the visitors probably having as much possession as Tonbridge but unfortunately the Peacocks did nowhere near as much with it as the National League South side whose cause was helped by playing against ten men for virtually the whole of the second half.

The game took its time to settle down in the conditions, with the first attempt on goal not coming until the 12th minute when Alex Akrofi, scorer of two goals against the Peacocks last season whilst playing for Aveley, fired well over the top from distance. Ollie Chamberlain then posted Town’s opening effort but again saw his left-footed shot from Dan Sullivan’s pass fly over. The wayward shooting continued when Joe Turner screwed a strike resoundingly wide before Jay Foulston did well at the other end, making ground into the box but seeing his cross cleared as far as Sullivan whose diagonal shot into the box again failed to reach the target.

Lloyd Irish was the first keeper called into meaningful action, pushing wide an 18 yard shot from Turner after he had cut in onto Akrofi’s pass while Town might have done better at the other end, Gethyn Hill nicking the ball on the right but with Toby Holmes waiting in the middle the cross was cut out by Jack Parter, with Joe Guest’s follow-up shot being blocked.

A bout of pressure around the Town area then saw Angels break the deadlock after 28 minutes. Turner’s cross from the right fell free to Tom Parkinson whose hooked pass found Ben Greenhalgh on the left side of the box and he drilled his shot beyond Irish into the far corner. The Peacocks then failed to clear again but this time Irish parried Turner’s strike and was able to gather.

Town were still well in the game though but were too often let down by sloppy passing and lack of incisiveness in front of goal. Sullivan fired two more shots over the top before he was presented with the Peacocks’ best chance of the half four minutes before the break, Hill battling to win possession before passing to the Town No 10 on the left but he was denied by keeper Jon Henly who blocked with his legs.

Town were made to pay as Tonbridge added a second goal a minute later. A Turner free kick was lofted in from the right and when the ball wasn’t cleared, Angels’ skipper Sonny Miles’ looping header forward was met by the dangerous Akrofi who stole in to volley home from six yards. A promising move saw Foulston’s cross headed clear and Henly was there to punch away Nick Grimes return delivery as Town returned to the dressing rooms trailing but still in the tie.

That all changed within six minutes of the second half. Jake Wannell, who had been booked for a foul on Akrofi in first half stoppage time, lost the ball to the same player on 46 minutes and pulled him down as he broke away. A second yellow and inevitable red followed, and Town were a man short. Sullivan made ground but shot wide before a third goal for Tonbridge effectively snuffed out Peacock hopes after 51 minutes, Greenhalgh netting his second goal of the afternoon with a clinical free kick from just outside the box.

Midfielder Lee Lucas was immediately introduced in place of Guest which gave Town more stability, but the cutting edge was still absent in front of goal. Hill teed up Sullivan whose shot skimmed the side netting, then Lucas found Hill who laid off to Jamie Short, but his strike proved a routine stop for Henly. Tonbridge meanwhile continued to carry the greater threat, a good build-up ending with Parter’s centre flashing across the face of goal, then a poor clearance gave Greenhalgh another opportunity which Irish caught above head height.

After Hill had launched another shot well over the bar, the hosts added their fourth after 75 minutes. It was all too easy as Turner and D’Sean Theobalds linked up down the right, the latters’ ball into the middle being steered home by substitute Javaun Splatt who could have scored a rapid second moments later, seizing on Short’s loose pass to run on, only to fire straight at Irish. Town kept trying to add some respectability to the scoreboard, Chamberlain firing too high and Hill meeting Owen Howe’s cross but putting his effort over the bar. Hill had another strike deflect off Miles for a corner as the home side were content to deal with anything Town had to offer whilst menacing on the break, Splatt failing to pick out the unmarked Jason Williams in the middle before Williams himself curled in a shot which Irish dived to push away.

Tonbridge added further gloss to the result three minutes into stoppage time when Angels’ Man Of The Match Greenhalgh crossed to the far post where Turner directed his header into the opposite corner. It might have been even worse before the whistle came, advantage being played allowing Splatt to run clear, but his effort was wide of the target. A very disappointing end to the Peacocks’ FA Cup campaign as they fell short at both ends of the pitch against an Angels side who celebrated reaching the 1st Round Proper for the first time in 48 years and we wish them luck. 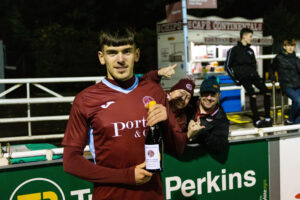