A blistering spell of four goals in 17 first half minutes propelled the Peacocks into the next round of the FA Cup after a thrilling win over their longstanding rivals. After falling behind, Town responded in clinical fashion before a revival from the hosts set nerves jangling until former Tiverton player Owen Howe calmly settled affairs with a late penalty.

With both sides coming into the tie unbeaten and with the Yellows boasting a 100% record, the scene was set for an intriguing afternoon. Unfortunately, the weather did its best to dampen spirits, constant rain requiring a 12 noon inspection and given the conditions the pitch held up remarkably well. Michael Peck fired wide with the first attempt of the game for Tiverton before the visitors responded with Nick Grimes’ header from a Jay Foulston cross being touched wide by keeper Lewis Williams.

Ben Adelsbury fired high and wide while Jamie Short’s header and Ollie Chamberlain’s strike also failed to hit the target as the Peacocks looked for inroads, but they had to concentrate at the other end against a lively home attack. Chris Shephard’ shot from the edge of the box was deflected wide before Lloyd Irish had to be alert to claw away Alex Fletcher’s looping header from Shephard’s free kick. Further pressure produced the opening goal after 20 minutes, Aaron Dawson picking out Dan Hayfield on the left and he neatly stepped inside to fire home inside the near post.

Williams claimed Foulston’s cross as Gethyn Hill waited to pounce but the Tiverton keeper was powerless to prevent the Peacocks’ equaliser on 27 minutes. Foulston’s cross was only cleared as far as Dan Sullivan just outside the area and when his first attempt was blocked, he tried again with his left foot to arrow a scorcher into the top right-hand corner. That proved the catalyst for Town as they enjoyed a goal spree up to the interval, taking the lead on 32 minutes when Jake Wannell’s long diagonal ball found Hill whose volleyed cross was headed into the open net by Toby Holmes for his sixth goal of the campaign.

Grimes headed over from a Sullivan corner before Irish produced another fine stop, parrying a fierce Fletcher cross-shot as the Yellows threatened. Two goals in three minutes though soon damaged home hopes and sent the large travelling support into dreamland. Chamberlain set Sullivan away on the left and his cross at the second attempt was nodded over the line by the unmarked Hill in the middle for the third on 41 minutes before Chamberlain was instrumental again, finding Short on the right to advance and drill past the despairing dive of Williams a minute before the break.

Tiverton came out with all guns blazing as they looked for a way back into the tie and very nearly pulled one back early on, but Irish was there again to deny Jared Lewington’s close range effort with a terrific stop. They did regain a foothold after 56 minutes when two substitutes combined to win a penalty, Jordan Bastin finding Andy Watkins down the left and when the former Bath City forward was caught by Joe Guest, Fletcher drove the spot kick down the middle.

The hosts now had their tails up and Irish made another routine save at his post from Bastin’s ground shot before holding Fletcher’s effort after he had cut through rather too easily. Hill planted a shot wide of the far post following a Peacocks’ break and Williams was called into action to prevent Holmes from increasing the lead, parrying his shot after a quick raid involving Chamberlain and Hill.

However, the momentum was with Tiverton. Hayfield fired narrowly wide before the deficit was reduced further on 69 minutes, Bastin weaving in from the right to send a low shot inside the post from the 18 yard line. Hayfield flashed another shot wide and Irish kept out a Watkins strike, with Bastin steering the loose ball across the face of goal as the Peacocks struggled to get the ball clear at times and found the Yellows coming straight back at them.

Head of Football Rob Dray made a double switch on 77 minutes which settled the tie. After Short had scooped a shot well over from Dan McBeam’s cleared corner, substitute Howe was tripped by Craig Woodman and the former Ladysmead favourite sent Williams the wrong way from the penalty to spark celebrations in front of the Town support.

Tiverton were still not done, Irish holding a Fletcher header and Hayfield curling a free kick past the post, and after one last corner had pinged around the box ending with Watkins having a close range shot blocked, referee Mansfield, who should be complimented on an excellent game, brought a pulsating match to a close. 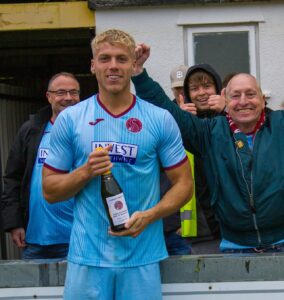