Town earnt a second bite of the cherry after they fought back from two goals down at a sodden Cuthbury. For the first hour it appeared as though the Peacocks Buildbase FA Trophy campaign was going to end at the first hurdle, but they turned the tie around in the final 20 minutes to take the Magpies back to the Cygnet Health Care Stadium for a replay.

Similar to Town’s last outing against Truro, conditions were again nasty with a strong wind and driving rain having a major impact on the flow of the game. That said, both sides adapted as best they could, with the hosts making the better start. Tony Lee sent a ball across the face of goal, then released Luke Burbidge who got round Lloyd Irish but saw his attempt cut out by Ryan Brett for a corner from which Franklyn Clarke eventually fired wide.

Lee made space to drill an angled shot just over before the Peacocks began to settle. Shane White had the first real attempt but shot well wide from Ollie Chamberlain’s knock-down. Andrew Neal then scampered down the right and passed inside to Matt Wright who failed to make a clean contact but still saw his effort bounce off the post and into the arms of grateful keeper Cameron Plain. The Magpies keeper was again called into action to palm Dan Sullivan’s drive over the bar after the Town striker had linked with Wright, and then dived to push aside Ben Adelsbury’s 30 yard strike.

Wimborne were still cutting through at the other end, Burbidge rifling narrowly over before being played in by Stefan Penny but despite getting round Irish he ran out of pitch while Town also continued to pass opportunities by, Plain blocking Wright’s effort after he had been put through by Sullivan and Jamie Short weaving into the box but was dispossessed as he weighed up whether to shoot or pass. With the half a minute into added time, Wimborne struck the first blow. Irish could not hold Curtis Young’s shot from just outside the box, the ball running free to Sam Bayston who fired home despite Nick Grimes’ attempt to keep it out.

Still seemingly dazed by the goal, Town were slow out of the blocks for the second half. Lee made room to fire over before the home side doubled their lead after 55 minutes, Burbidge playing a neat pass through to Bayston who clipped the ball into the corner past Irish. At this stage Taunton were struggling to keep meaningful possession and do anything with it as Wimborne again created openings, Burbidge having a shot held while Lee dragged his effort wide before Irish saved Young’s shot.

Grimes headed Brett’s corner wide as Town attempted a rescue act which was given a boost when they were awarded a penalty after 75 minutes when Wright was caught by James Stokoe as he latched onto White’s ball over the top and Neal did the honours from the spot.

This goal was the catalyst for Town to take a grip on the game. Sullivan put Neal away and was on hand to meet the return ball into the middle, only to see Plain gather his strike safely. However with ten minutes left, Town drew level. Brett fed Wright on the left side and his centre was slotted home by Harry Kite. Brett pinged an angled shot wide after more pressure from the visitors but it was Wimborne who had the last say when a Burbidge corner caused a frenzy in the Town box, a mass of bodies keeping the ball out which was cleared to Burbidge, his delivery back in was again not cleared properly and Irish was forced to tip over Sam Davidson’s chipped cross to preserve parity and the chance to do it all again three days later. 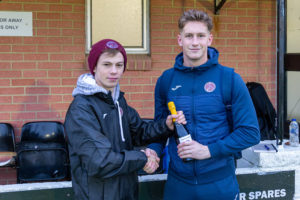