Two cracking second half goals confirmed the Peacocks’ progress to the 2nd Qualifying Round of the Buildbase FA Trophy. Early doors it was shaping up to be another difficult evening after Town found themselves trailing within the first five minutes but once they found their feet they went on to boss the game and were well worth their comfortable victory.

The Town team was the same that finished the first tie in Dorset, but they were rudely awakened after just three minutes when they lost the ball in midfield and Kieran Roberts ran onto a pass through the middle to get around Lloyd Irish and slot into an empty net. The following twenty minutes or so proved something of a non-event for the hosts who struggled to make any impression as they attacked the Invest Southwest End, not that the visitors did much either as they comfortably defended their early breakthrough.

The first real opening came after a run from centre half Nick Grimes was ended illegally just outside the area but Wimborne keeper Cameron Plain made the save to deny Ben Adelsbury from the free kick. Town began to warm to their task as Matt Wright cut in to see his shot blocked, as did Dan Sullivan who muscled through after Ryan Brett’s free kick had been punched clear. Further pressure then led to Plain thwarting Shane White’s far post header while a neat bout of passing ended with Ollie Chamberlain firing a left footer over the bar.

An isolated Magpies break saw Stefan Penny curl an effort wide of the target before action switched back to the other end, Brett’s free kick from right of centre evading everyone and travelling just the wrong side of the upright. The equaliser eventually arrived six minutes before half time, Brett swinging in a free kick from the left to the far post where Grimes headed into the middle and Andrew Neal met the ball with a scorching half volley to find the roof of the net.

Town could easily have added more before the break. Harry Kite’s cross reached Neal who turned to fire in a shot which Plain blocked with his legs and then replicated to deny Chamberlain from the follow-up. Three successive corners, a shot from Kite which was blocked leading to appeals for a handball and then a fourth corner which Adelsbury headed goalwards, but which was adjudged not to have crossed the line were also all crammed in until the whistle sounded to give Wimborne some relief.

Lewis Hall came off the bench for the second half, replacing Neal as a precaution against a tight hamstring, and he had a major impact on the rest of the game. Firstly though it was White who volleyed wide from the edge of the box and then Brett who was teed up by Sullivan, but his effort went the wrong side of the post, as Town continued where they left off before the interval. The Peacocks’ crisp football was rewarded twelve minutes into the half when they took the lead. Jamie Price’s neat ball fed White and from his cross Hall was denied by Plain from close range, but the Town substitute was quick to react and volley the rebound into the roof of the net.

Town pressed for more, no doubt conscious of their own comeback in the meeting three days earlier, with Wright driving over as Wimborne began to live a little bit dangerously at the back before a quality goal further extended the home side’s advantage after 68 minutes. Hall won the ball to advance down the left flank and deliver a superb cross for Wright to power home a header from six yards for his eighth goal of the campaign. Hall very nearly doubled his tally for the evening, an excellent Grimes pass picking him out but Plain again came to his side’s rescue by tipping the strike over.

Wimborne then enjoyed a decent spell. A long ball found Curtis Young who sprinted into the area but saw his angled shot across Irish hit the far post before being cleared, then Irish had to turn aside Young’s cross-shot. The Peacocks were soon back on the offensive though, Sullivan firing a 25 yarder just over and then being brought down to earn a free kick on the very edge of the box which Brett struck well but Plain was equal to as he dived to palm away. The Magpies keeper could do nothing about Town’s fourth goal after 82 minutes though as Chamberlain received Hall’s pass inside and made room to drill a terrific effort beyond Plain from 20 yards and into his left-hand corner.

Both keepers had one more save to make, Irish comfortably holding Penny’s ground shot while Plain parried Sullivan’s strike from the right. Town now look forward to a first ever meeting with Isthmian League side Aveley in the next round. 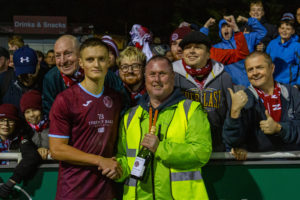