The Peacocks advanced to the 2nd Qualifying Round of the Emirates FA Cup with a comfortable victory over their former league rivals. The ‘Freds’ now sit a level below Town in the Southern League Central Division and despite a spirited performance they never looked likely to upset the odds against the new look hosts.

Head of Football Rob Dray named an unchanged side from the season opener at Hayes & Yeading three days earlier and the Peacocks enjoyed the early possession as they looked for a quick breakthrough. However chances were hard to come by, the first real glimmer coming when Wantage keeper Joe Gorman saw his clearance from a backpass rebound off Toby Holmes and go just wide.

Ben Adelsbury launched a free kick high over the bar after Ollie Chamberlain had been clipped and then a Holmes break saw him cross to Gethyn Hill whose looping header failed to test Gorman while Holmes surged away, beat a challenge but saw his shot blocked by the keeper. Step forward Dan Sullivan who on 23 minutes broke the deadlock with a cracker. He received a pass from Nick Grimes and in one movement turned onto the ball and with little backlift rifled a great strike over Gorman from over 25 yards out.

A break soon after from the visitors gave them an opportunity, a cross from the right only cleared as far as Charlie Killie who saw his effort barred by Adelsbury before Town were back to business at the other end. An unmarked Sullivan glanced Jake Wannell’s cross wide and Jamie Short’s cross reached Holmes at the far post, however his close range attempt was blocked and then the overhead follow-up was over the bar.

Chamberlain was causing the visitors numerous problems and when he was fouled again on the edge of the area, Jay Foulston fired the free kick off the wall for a corner which eventually culminated in Holmes laying the ball back to Grimes but the Town captain drilled over. The pressure told three minutes before half time when Short burst in from the right to fire a left-footer against the post and Holmes tussled to win the rebound, beating the covering defenders and doing enough to get the ball over the line for the Peacocks’ second goal.

The second half saw more of the same as the Peacocks sought to add to their tally. Another run from Chamberlain ended with a shot which Gorman parried and when Holmes laid the loose ball across for Hill, his shot towards the inviting net was deflected the wrong side of the post. The Wantage defence continued to work overtime, a clearance from a defender going skywards and landing on top of the crossbar before Town’s passage to the 2nd Qualifying Round was sealed after 55 minutes, Sullivan regaining possession after initially losing it and putting Holmes through to slot past the oncoming keeper from 15 yards.

Owen Howe, having barely been on the field a minute after replacing Hill, then opened his account for the Peacocks on 63 minutes, Joe Guest winning the ball to allow Chamberlain a run and when the ball broke free, Howe was there on the edge of the area to sweep it first time into the far corner for a fine finish. Sullivan was unlucky to see his volley deflected for a flag kick after Howe had headed down Ross Staley’s cross before another substitute made it 5-0 after 76 minutes. Dan McBeam had minutes earlier replaced Chamberlain and capped off the scoring with an excellent strike, receiving Foulston’s short corner on the right before cutting in and making space to arrow his effort into the far top corner.

Wantage sub Marley Hamilton did his best to get his team on the scoresheet, forcing Lloyd Irish to turn his angled shot away and then testing him again as he sent in another shot from the opposite side of the area. There were to be no scraps for the visitors though as Howe had the last chance, sending a shot straight at Gorman after the referee had played advantage following a challenge on Sullivan. A decent night’s work for the Peacocks and a welcome £2,250 in prize money as they now await Friday’s draw for the next round. 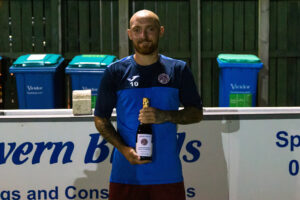