Three first half goals secured the Peacocks’ progress into the next round of the League Cup as they comfortably saw off the White Tigers. Both teams took the opportunity to rotate their squads, with Town missing seven regulars due to injury and suspension and including new loan signing Joe Budd whilst the City side also fielded some unfamiliar names.

It was the home side which settled the quicker, Jared Lewington shooting wide early on and then touching home a Josh Thomas cross, only to have the goal chalked out for offside. The opener wasn’t far away though, coming after 13 minutes when Conor Hartley won a corner from which Jay Foulston delivered to the far post for Jake Wannell to steer home a header for his third goal in two games.

The hosts kept up the early pressure when Jack Veale’s pass put Dan Sullivan away on a great run which ended with a shot deflected for a corner and then Lewington saw a shot blocked following good link-up between Jack Goodall and Sullivan. Truro were unable to clear the danger, the ball falling to Foulston on the left side of the box who held off a challenge to arrow his finish into the far corner of Morgan Coxhead’s net for the second goal of the night on 18 minutes.

Little had been seen so far of the City attack, their first real chance coming when Wannell was penalised for a foul on the edge of the box but Will Buse in the home goal was equal to Ryan Dickson’s free kick as he got down well to hold. All the momentum was towards the Truro goal as Town dominated. After Lewington had been unable to direct his header on target from Foulston’s deep cross, he had better luck on 26 minutes when he powered a header into the opposite corner from Foulston’s centre to hand Town a 3-0 lead. Dickson was proving the main outlet for the visitors, and he saw another cross held by Buse at his near post before Conor Hartley beat two men at the opposite end, cutting in from the right to fire narrowly over the top.

The second half saw Town continue to remain in control. Lewington got free on the right early on but was denied by Coxhead while Foulston’s clever free kick teed up Sullivan for a chance but the Town skipper for the night swung at the ball but failed to connect. Coxhead then fielded a Sullivan free kick before a blatant push on Hartley inside the box was unbelievably ignored by the officials.

Hartley fired wide after receiving the ball from Goodall as the Peacocks kept looking for a fourth, but it was Truro who concluded the scoring for the evening with a goal out of nowhere with 20 minutes remaining. Dickson’s cross reached Zac Hartley on the right and his seemingly innocuous looking effort curled past Buse to find the far corner.

Coxhead did well to parry Foulston’s free kick as the Peacocks responded soon after but generally the tie began to dwindle out in the latter stages with Town comfortable with their lead and City only looking likely to threaten when the home defence lost concentration. One such occasion saw Nick Grimes pass fall straight to Tom Dolan whose strike was held by Buse low down.

Late openings for the hosts came when Veale found Hartley, but his shot took a deflection to go wide and then three successive corners failed to bear fruit, the final one being headed over by Ioan Richards. Another sloppy moment from Town gave Kayden Gordon-Dunn a shooting opportunity which Buse pushed away before the final whistle confirmed Town’s safe passage.

“It was a good win and I thought we played really well, we applied ourselves well…” watch Rob Dray’s Match Reaction on Peacocks TV HERE

Match highlights on Peacocks TV can be seen HERE 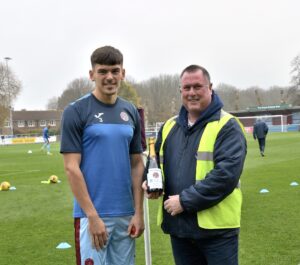