Metropolitan Police are becoming something of a bogey side after ending the Peacocks’ unbeaten record this season. The result was especially frustrating on two counts, the performance falling well short of Town’s capabilities which have been to the fore in the FA Cup this season while a promising start in this game faded away, a late penalty proving merely a consolation against the well-organised and cohesive visitors.

This was game number eight of the campaign but the Town side that took to the pitch on a crisp, autumnal afternoon was the same as the previous seven. The hosts made a positive start to proceedings, penalty claims after Toby Holmes was challenged by Junior Eldstal being dismissed. A Jay Foulston corner was then flicked towards his own goal by Jack Mazzone but the Police striker was saved by Ben Shroll who cleared off the line, and when the ball was returned into the area a header from Dan Sullivan was pushed over the bar by keeper Rhys Forster.

The early promise continued when Jake Wannell’s superb pass picked out Sullivan in the box but Eldstal intercepted to clear the danger while skipper Nick Grimes’ pass was just too pacy for Holmes to latch onto. Gethyn Hill then put a header narrowly past the far post from Foulston’s free kick on the quarter hour.

Gradually the visitors began to find their feet. Shroll drifted forward and shot over the top, then a penalty appeal after Jamie Short challenged Ollie Knight was waved away. Another Police break saw Knight’s shot deflected for a corner and when a second one was earned moments later the Police took the lead. Knight’s corner was not cleared adequately and when Arsen Ukjaj passed to Shroll in the box he turned to place a shot into the corner on 24 minutes.

Sam De St Croix curled an effort wide as the Met side maintained their upsurge and Lloyd Irish was quickly off his line to clear from the advancing Knight who had been put clear by Jack Mazzone’s lofted pass. A patient build-up saw Sullivan have a shot blocked at the other end before Ben Adelsbury headed on a Foulston corner which fell for Hill but his poke at goal was cleared off the line. Foulston then fired a free kick just over the top as Town ended the half trailing, knowing they needed to make better use of their possession if they were going to pierce the well-marshalled Police defence.

When play resumed the visitors nearly added to their lead with the first attack, Luke Robertson finding Knight in space but Irish and Wannell combined to thwart his attempt. Lee Lucas was introduced ten minutes into the half, increasing Town’s creative capability, but on the hour the Police scored a second, a De St Croix cross from the right finding Blackmore who cleverly played a dummy and drilled into the net.

The final half hour saw the Peacocks persevere attacking the Invest Southwest End but as the minutes ticked by there was almost an air of inevitability that it wasn’t going to be their day. Wannell’s header drifted back across goal and wide from Foulston’s corner, then Lucas did his best to kick-start a revival, his great pass releasing Hill who spooned his cross over, and a ball over the top finding Holmes who uncharacteristically sliced wide.

Foulston wriggled into the box and had his shot parried by Forster but clear opportunities were not plentiful, while Irish’s miskick could have had a worse outcome when the Police countered, his clearance going to De St Croix whose strike was straight back at the Town keeper. Town did reduce the arrears a minute from time when Holmes was tripped by Alex Fisher, Owen Howe driving home the penalty for his fourth goal of the campaign. This proved a consolation however, a Holmes shot in stoppage time being saved by Forster signifying the last chance for the home side to salvage a point, as the visitors gained an ultimately deserved win. 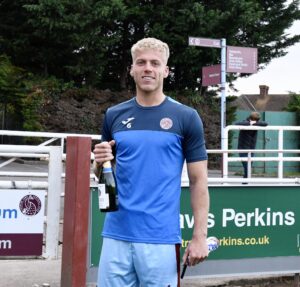