There were no fairytales at The Cygnet Health Care Stadium for Laverstock & Ford as the Peacocks advanced to the next stage by a single goal. Birthday boy Ross Stearn got himself on the scoresheet when a fifth minute corner from Lloyd James fell to his feet to poke the Peacocks ahead. Stearn then saw a shot blocked and McCootie’s chip to the near post was glanced over keeper Matthew Taylor by Nat Jarvis but headed clear by a defender. Laverstock then had their own chances at goal with Tyler Brockway and Archie Lovegrove seeing their shots blocked and saved respectively. Taylor pushed Stearn’s header over the bar before the most notable effort for visitors fell to the feet of Russell Jones who was unable to capitalise after finding himself in space in the Taunton penalty box. Taylor again denied Stearn’s free kick as the half ended with the Peacocks narrowly ahead.

The second half started with a chance for the visitors as skipper Adam Bourner saw his effort from range safely held by Taunton keeper Jack Bycroft. Town had further opportunities during the half but failed to take them, a late strike from Foulston being Town’s best chance to settle the tie when he saw his low effort rattle the post before being cleared. Laverstock’s chance to clinch a replay came on the brink of injury time when Foulston was penalised for handball from a Pete Fletcher cross. This gave Lewis Wakeford the opportunity to give the Wiltshire side a chance to level the scoring. His penalty was low to the left and met by the leg of Bycroft who denied a replay for Laverstock as the Peacocks got away with one as they progressed to the next round.

“I think they all know now that that’s not good enough…..” watch Rob Dray’s Match Reaction on Peacocks TV HERE 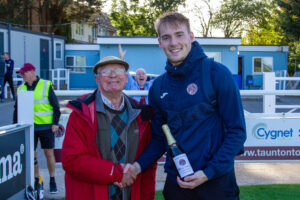