First of all, the important bit – the Peacocks gained their sixth Southern League win on the spin as they edged out their visitors from Hertfordshire to remain in 4th position and well and truly in the promotion mix. Town comfortably did enough to warrant victory although not at their best going forward, but this needs to be put in the context of the worst season in many a year for injuries in the Peacocks’ camp and this game did nothing to improve the situation.

With Jay Foulston and Ollie Chamberlain both ruled out following knocks induced by the 3G pitch the previous weekend and with Ross Staley suffering from covid, Head of Football Rob Dray again had to reshuffle the team who nonetheless dominated the opening quarter of the game. Langley keeper Alfie Marriott was called into action inside the first minute when he parried Ross Stearn’s strike from the right while Gethyn Hill was unable to direct his header on target from Zac Smith’s cross. Town thought they had made the breakthrough when Hill got on the end of Dan Sullivan’s cross to head over Marriott, but referee Barber ruled out what seemed to be a perfectly good goal for an apparent infringement, not backed up by video evidence. That said, the officials did a good job overall over the 90 minutes.

Ten minutes in though and the Peacocks did register one that counted. Hill dispossessed Kyle O’Connor-Ajayi on the right and was tripped by the Kings defender as he ran into the box. Toby Holmes sent Marriott the wrong way from the penalty spot and Town were ahead. Their lead was doubled just four minutes later with the award of another penalty, Stearn this time being caught by O’Connor-Ajayi as he darted into the area, and Holmes picked out the opposite corner to his earlier effort for his 17th goal of the campaign.

Marriott clutched Sullivan’s strike before the visitors posted their first attempt of the game, O’Connor-Ajayi scuffing a shot wide at the Travis Perkins End. The Peacocks remained on top though, a lovely Stearn pass releasing Lloyd James on the right, and his cross was glanced just wide by Hill, and Holmes riding a couple of challenges to find Stearn whose shot was pushed away by Marriott. The Kings were growing into the game as the half progressed, with Will Buse getting down well to save Max Bustamante’s effort from just outside the box and then fumbling Erin Amu’s shot wide for a corner. They were rewarded three minutes before the interval when they pulled a goal back, a Jamie Jellis corner only partially being cleared and Ferrell Charles turning to fire beyond Buse into the far corner from 16 yards.

The second half produced no further goals and was lower on the entertainment scale than the opening 45 minutes, with the Peacocks defending solidly against any threat Kings had to offer while carving out a few opportunities themselves. Marriott just beat Hill to Sullivan’s low driven cross in the opening minutes while another cross from Hill was just too far in front of Holmes’ outstretched leg. A corner from Stearn then nearly paid dividends, a Ben Adelsbury header being clawed out for a corner by Marriott at the far post.

There was then a delay to allow treatment for Hill who collided with Marriott going for the ball. Unfortunately, the groggy Town striker had to go off, further compounding the injury list and necessitating a trip to hospital where it was found he had suffered a fractured cheekbone. Here’s hoping for a speedy recovery Geth 🤞

The final ten minutes presented several half chances for Town, Sullivan’s header deflecting off Charles for a corner and Nick Grimes hooking a volley over the top from James’ cross before an incisive run from Smith ended with a shot which Marriott held at the second attempt. Smith then made headway down the left before driving narrowly over the top from the edge of the box. Little had been seen of the Langley attack after the break due to the efficiency of the Town defence, but they had one last chance to salvage something when they were awarded a free kick 20 yards out, but Jellis sent his shot wide. Six minutes of stoppage time produced a corner which Adelsbury headed wide as Town chalked off another success to round off a perfect January. 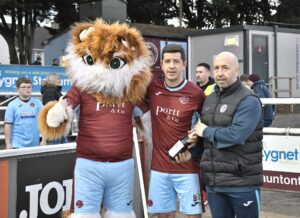