Although not back to their best, the Peacocks returned to winning ways after two consecutive defeats with victory over former manager Leigh Robinson’s side. It was far from straightforward though against a Magpies team coming into the game on the back of a 6-1 home loss at the weekend who might well have gone home with at least a point on another day.

For the first time this season there were changes in the starting line-up, with Owen Howe and Dan McBeam both making their first starts and new signing Jack Goodall debuting at right back. The opening quarter of an hour saw little in the way of clear openings at either end. Howe saw an early angled shot blocked for a corner before turning onto a Goodall cross and firing over. Dan Sullivan then fed McBeam on the left, but he dragged his shot wide of the far post.

Dorchester produced even less, Lloyd Irish collecting Tom Bath’s tepid shot and a Harry Burns cross ending on top of the net. It was the visitors though who drew first blood after 20 minutes. Moments after Toby Holmes had lashed a ball across the face of goal, the Magpies broke upfield, Kpama Ngoy winning a challenge to feed Burns who in turn squared to the unmarked Olaf Koszela in the middle and he produced an accomplished finish into the top corner.

Town nearly responded immediately, with Holmes having his cross parried to McBeam whose shot was blocked, but the hosts couldn’t capitalise as Dorchester eventually got the ball clear after a frantic few seconds. Koszela then came close to adding his second, receiving a crossfield pass, cutting inside his man and curling a shot narrowly past the far post. It was the Peacocks though who enjoyed the lion’s share of openings for the remainder of the half. Howe had a strike deflect wide and Sullivan fired over from the edge of the box while Goodall’s cross found Ollie Chamberlain whose hooked half volley from 18 yards produced a sprawling save from Will Buse.

The equaliser duly arrived five minutes before half time, Sullivan’s pass down the left found Holmes who still had work to do under pressure from defenders but his pace and strength took him away before coolly tucking the ball past Buse for his 10th goal of the campaign. Jay Foulston sent a 25 yard shot over to end the opening 45 minutes with hope of better things to come after the interval.

And it did as barely two minutes had elapsed before the Peacocks were ahead. Sullivan lofted a ball forward and a knockdown from Holmes found birthday boy Chamberlain who chested the ball down to drive a left-foot volley in off the post from the edge of the area. This time it was the visitors’ turn to post a rapid response, Ngoy’s cross finding Bath on the near post but Irish blocked well for a corner. Chamberlain’s deflected shot was grabbed by Buse before Town made a double substitution, with Lee Lucas and Gethyn Hill replacing McBeam and Howe. Hill soon made an impact, winning a corner from which he ran in to plant a header just over and then Chamberlain had another shot clutched by Buse at the second attempt before Hill could profit.

Dorchester were never out of the game though, Koszela threatening with an angled strike from the right which was pouched by Irish and then a shot which was wide of the near post. Tiago Sa also saw his effort deflect wide before Irish pulled off an acrobatic catch to claim a shot from Leighton Thomas who was set up by Koszela.

Taunton ideally needed a third goal and were close to getting it when Goodall’s byeline cross found Holmes who glanced a header inches past the back post. Lucas scuffed a shot wide before it was Buse’s turn to deny the opposition, firstly parrying Chamberlain’s attempt from ten yards after the Peacocks’ midfielder had cleverly made room for himself and then diving to push aside a fierce shot from Lucas. Magpies defender Louie Slough then got his body in the way to block a shot from Holmes and Sullivan rifled a drive over the top.

The missed chances nearly came back to bite the Peacocks on the tail. In stoppage time a last fling from Dorchester came close to a leveller. A cross from Oakley Hanger was cleared to Burns just outside the box but Irish pulled off another fine stop to parry his strike and Koszela crashed the rebound against the post. Town might have made hard work of it but at the end of the day it is three points to begin restoring that winning feeling. 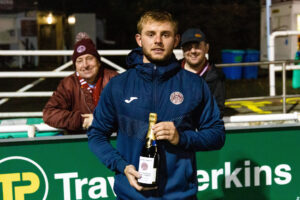