The Peacocks extended their sequence of unbeaten League matches at the Cygnet Health Care Stadium to 26 with a deserved albeit unmemorable win. Not since Metropolitan Police escaped with the spoils in August 2021 had Town lost out on home turf and they rarely looked like having that record upset by an Ambers side also making their debut this season in the National League, but the hosts didn’t make it easy for themselves after going off the boil in the second half.

There were no changes to the Town starting line-up from the one that had exited the FA Cup a week earlier, with the only squad absentee being Ross Stearn whose vehicle had broken down en route to the ground. After two minutes silence for Remembrance Day and in memory of Elsie Harris, wife of Club President Tom, the game began with early exchanges very much in the Peacocks’ favour, winning the first corner of the game after two minutes which Jay Foulston delivered, and Nick Grimes headed over. Following a bout of applause after seven minutes to show support for critically injured Bath City striker Alex Fletcher, Town passed by another chance on the quarter hour, Nick McCootie meeting Foulston’s cross from the left but sending his header over the bar.

The Ambers first attempt came from Reece Beckles-Richards whose shot from distance deflected wide while Emmanuel Maja sliced an effort over the terrace roof, but it was the hosts who were very much dominating as the half progressed. McCootie got behind the visitor’s defence to move inside and test Cheshunt keeper Preston Edwards with a shot which he saved low down, the pressure being maintained with Zac Smith having a shot blocked before another opportunity went begging when Foulston swung a cross to the far post where Nat Jarvis directed his header wide of the target.

Town were forced to make a change just before the half hour when Ollie Chamberlain retired with a groin twinge, being replaced by Joe Budd but this did little to disrupt the flow as the home side remained on top. Foulston’s free kick flew across the face of goal without anyone able to get a final touch and Budd volleyed over after a Lloyd James’ corner had been flicked on while a Lee Lucas pass across the edge of the box was drilled wide by McCootie.

Peacocks’ keeper Jack Bycroft made his only real save of the half when a Cheshunt corner looped off a group of players and he was forced to scoop the ball over the bar for another corner which led to a penalty appeal for handball. Nothing doing though and the danger fizzled out. The best moment of quality in the whole game arrived a minute before the break. Budd’s cross from the right was sublimely laid off by Lucas for Smith to chip into the middle where Jarvis steered his header over the line into an unguarded net to provide Town with an interval lead and Jarvis with his second goal of the campaign.

The second half was pretty hard going in comparison. The Ambers nearly had the perfect start when Lewis Hobbs’ pass downfield into space found Ken Charles free, but Bycroft comfortably pouched the 18 yard shot. The biggest threat to Town’s advantage though was their lack of efficiency in front of goal which always meant the visitors were in with a shout. Foulston drifted a shot over and Dan Ball flicked a header wide before Town’s best attempt of the half came when the ball fell free for Lucas who rifled a half volley inches wide of the post. Grimes’ header from a James free kick also missed the target while a Charles snapshot at the other end proved a routine stop for Bycroft.

The Peacocks had Bycroft to thank after 78 minutes when he pulled off a brilliant save to keep the lead intact, Cheshunt sub Josh Shonibare scurrying down the right to cross from the byeline and Lucas so nearly diverting the ball into his own net until Bycroft showed razor sharp reaction to parry the ball away. The visitors again had a sniff when Joe Re slipped a pass through to Charles, but Ball’s challenge did enough to divert the attempt for a corner which Hobbs headed over.

There had been little threat from Town in the final third in the latter stages of the game until James’ ball into the centre missed sub Dylan Morgan as the hosts looked to manage the remainder of time left. This was extended by seven minutes of stoppage time due to treatment for Ambers’ keeper Edwards who collided with his own player Raul Da Silva. Edwards eventually had to go off and with all three substitutes already used, Beckles-Richards donned the gloves, and his side were down to ten men for the last few minutes.

The last opening came and went for Cheshunt when Charles saw his shot deflected for a corner which came to nothing as the Peacocks thankfully got the job done. Not easy on the eye in the second half but a vital victory nevertheless with several sides below them also picking up points.

” I thought our control of the game especially in the first half was really, really good, I was really pleased with that………..” watch Rob Dray’s Match Reaction on Peacocks TV HERE 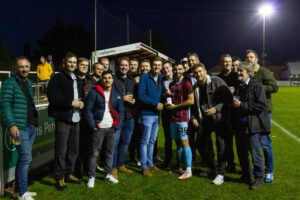