Another National League South game of defences ruling the roost led to the Peacock’s third goalless draw of the season. Whilst the point against a City team in 4th spot was commendable, both sides did not deserve any more, with neither doing enough up front to warrant victory in what was frankly a dull contest with few moments of creativity or excitement to entertain the 928 crowd.

With Dan Ball ruled out through illness, Jay Foulston had to switch to centre half while Lee Lucas, Joe Guest and Dave Sims-Burgess were brought in to replace Nat Jarvis, Ross Stearn and Dylan Morgan from the previous weekend’s inadequate FA Cup showing. The Clarets, beaten only once in eight League fixtures so far, began the brighter. A decent cross from the left by Eduino Vaz was headed clear and fell to Charlie Ruff but his soft volley proved easy pickings for Jack Bycroft in the Town goal while a mistake by Guest allowed Jamie Yila to make ground and cut the ball back for Ruff to drive goalwards, with Foulston making the block. A free kick 20 yards out after Nick Grimes had fouled Simeon Jackson then gave Cameron James an opportunity which he curled way over the top.

It wasn’t until the 22nd minute that the Peacocks posted their first attempt. Lloyd James’ free kick from a central position was knocked down by Grimes and fell to Lucas on the edge of the box but he was unable to keep his strike down as it sailed over the bar. Grimes was involved again a minute later, James curling another free kick to the back post where the Town skipper ran in to plant a header back across goal and narrowly over. Nick McCootie’s flick set up James for a shot which was blocked and from the ensuing corner, James latched onto the clearance to lob high over the target. Khale Da Costa moved inside to balloon a strike over for the visitors, epitomising a forgettable first half.

Chelmsford keeper Ove Ehejeri escaped with a couple of errors when play resumed. A misheaded clearance fell to Lucas whose lob was caught by the keeper who then miscued his punch from Foulston’s corner towards goal where McCootie couldn’t get enough on his header to direct in. Ejeheri made his only real save of the match on 65 minutes when he gathered Ollie Chamberlain’s strike from distance before Town made a double switch two minutes later, Ross Staley and Stearn taking over from Lucas and Sims-Burgess. Town were having the better of it at this stage, with a nice move seeing James feed Chamberlain whose cross missed a claret shirt and when the ball was returned into the box by Foulston, the clearance fell to Joe Budd who fired a left-footed shot inches over the bar.

Chamberlain drove another shot high and wide before Chelmsford started to take the initiative for the final ten minutes. Liam Trotter played square to Henry Ochieng who slanted an effort wide from the edge of the area and a Kai Yearn corner was nodded back in by James with no City player able to connect where it mattered. The visitors continued their quest during six minutes of stoppage time, Jackson having a close range shot blocked by Grimes before the City striker might have done better from Yearn’s centre, running in at the near post to head the wrong side of the post (or right from Town’s perspective). A corner from the left then rebounded off Grimes and squirmed wide of the upright while a further two late corners were unsuccessful for the Clarets as Town secured the point.

Just five goals conceded from nine National League games is a fantastic achievement for the Peacocks but the fact only six goals have been scored is more concerning and an improvement will surely see some of the draws being turned into victories.

” I think it is a really really good point and a clean sheet against one of the sides who are in the Play-Offs…..” watch Rob Dray’s Match Reaction on Peacocks TV HERE

Match Highlights can be seen on Peacocks TV HERE 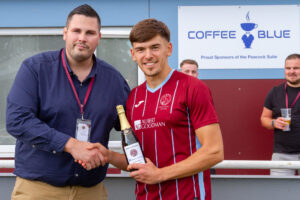