Town earnt a trip to their conquerors in last season’s final Weston-super-Mare as they beat a young City side at the 2nd Round stage. Against spirited but outgunned opposition the Peacocks’ progress was never in question and had they had their shooting boots on then the margin of victory would have been far greater.

Attacking the Invest Southwest End, Town nearly broke through in the first minute as Ollie Chamberlain had his header blocked on the line. Luke Spokes then saw his shot turned wide by Bath keeper Harvey Wiles-Richards and from the resultant Ryan Brett corner Spokes volleyed against the near post. The openings continued when Brett found Spokes who skillfully outwitted the defender but fired wide of the far post.

The breakthrough finally came after 16 minutes, Jamie Short linking up with Spokes to rifle into the net from the edge of the box. A rare Bath foray saw Lloyd Irish warm his hands as he held a shot from Scott O’Brien before the Peacocks doubled their tally on 27 minutes, with Spokes setting up Dan Sullivan to fire home into the far corner. Recent signing Spokes was doing everything but score as he saw two further efforts saved by Wiles-Richards while Sullivan volleyed Brett’s corner over the top as Town ended the half in total command.

Matt Wright replaced Sullivan for the second half as the Peacocks continued to enjoy a glut of possession and chances but couldn’t translate into goals. Shane White headed just wide from Brett’s free kick and Wright’s header was saved by Wiles-Richards while Spokes saw another effort travel wide before Wright’s goal was disallowed for offside. Ross Staley’s strike was deflected wide, Callum Watts put Spokes in but again Wiles-Richards denied him and then Wright set up Brett who missed the inviting target as the game resembled a pre-season friendly at times.

Bath were reduced to ten men after 68 minutes when substitute Shaquile Perkins who had only been on the field for twelve minutes was sent off for retaliating to an Owen Irish challenge. Wiles-Richards fumbled Staley’s shot round the post before Michael Meaker came off the bench on 78 minutes, confirming his 33rd season in football at the ripe old age of 48.

Further opportunities came and went for the hosts with two efforts striking the woodwork. Wright’s attempt hit the post, as did Brett’s shot following a Short cross, while an Irish header was straight at Wiles-Richards. Passage to the Quarter Final was achieved with the minimum of fuss but the Peacocks will be well aware a much sterner test awaits at Swindon Supermarine in their next game. 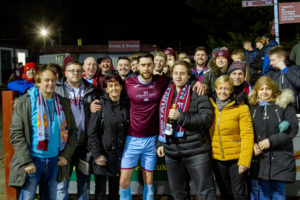