The Western League side overcame the 53 place gap between the sides in the non-league structure to knock the Peacocks out of the Somerset Premier Cup in the first round following a penalty shoot-out. The fact that the game had got as far as that is testament to the battling performance of the visitors but also an indication of the distinct lack of quality and seemingly desire from a Town side which despite resting eight starters from Saturday still had nine players in the line-up who had featured in the Southern League this season.

The home side made a brisk enough start, Dan McBeam seeing a strike turned wide by Stags keeper Lewis Coombes who then palmed away a snapshot from just outside the area by the same player. Ross Staley’s effort was blocked, and Toby Holmes weaved into the box but also saw his shot hit a defender for a corner while Jared Lewington headed wide after Holmes had lobbed into the middle as Town enjoyed the vast majority of early possession.

Ashton & Backwell though came the closest to breaking the stalemate on 19 minutes, Jason Radnedge having a shot deflect onto the post following a cross from the left. Will Buse in the home goal then had to be alert to push away Conor Hartley’s cross-shot while at the opposite end the Peacocks struggled to make any inroads. Staley and Holmes both fired wide, a Staley cross flashed across goal without anyone finding a touch and several other attempts were blocked off by a hard-working Stags defence.

With half time approaching Town had another opportunity but Jack Veale planted a free kick over the top before Lewington curled a strike narrowly wide and McBeam’s 25 yard blast was turned wide by Coombes. Any expectation that chances would finally start being converted into goals in the second half was sadly misplaced as the hosts continued to make hard work of it. McBeam’s drive was parried wide by Coombes while Staley dragged a shot wide of the target before the visitors nearly took advantage of some sloppy play, Connor Saunders finding Radnedge who ballooned a shot over the bar.

That miss was soon forgotten when Radnedge gave his side the lead on the hour, Connor Saunders dispossessing Veale and the loose ball being casually swept home into the corner from 30 yards past a surprised Buse. The Town keeper then had to turn Hartley’s shot wide at his near post after the Stags winger had twisted into the box as the buoyant visitors threatened another. The Peacocks huffed and puffed as they searched for an equaliser, Veale’s free kick falling for Zac Smith and after his effort was again blocked, the follow-up was lashed wide by Brad Pfupa while McBeam’s cross picked out no claret shirt.

Ashton nearly doubled their lead when Hartley found Radnedge inside but the goalscorer blasted over before Town were awarded a penalty on 83 minutes following a Sam Thomas challenge on Holmes who steered home the spot kick to bring the sides level.

No late onslaught by the home side, in fact it was the Western Leaguers who applied some late pressure but also saw two of their management team red carded by referee Jackson after objecting to something or other. By then I had long accepted the tie would go to the penalty shoot-out…and so it came to pass.

Charlie Saunders, Joe Bishop, Thomas, and Connor Saunders all successfully converted for Ashton & Backwell while Holmes, Smith, Lewington and Buse did the same for Town. When Brad Skidmore netted his side’s fifth, it meant Veale had to score to keep the tie alive, however his strike crashed off the bar. Credit to the visitors who enjoyed wild celebrations while Town were left to reflect on the harsh reality that they were simply not good enough on the night. 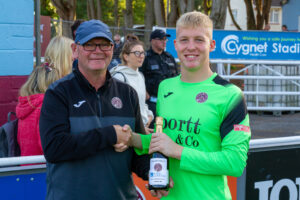