Two goals in quick succession straight after the half time interval steered the Peacocks into the Third Round Proper of the FA Trophy. After an indifferent performance in the first half during which the visitors had grabbed the lead, Town overturned the deficit in an increasingly feisty encounter to secure only their second victory in the competition in the past five seasons.

With Ollie Chamberlain not totally fit, Joe Budd stepped into the starting eleven, the only change from the previous weekend’s meeting with Cheshunt. Dulwich were making their first ever visit to the Cygnet Health Care Stadium and were forced to defend from the kick-off as a positive start from Town pushed them back. Joe Guest’s shot through a crowd of players took a deflection to earn the opening corner of the match from Lloyd James which Nick McCootie directed comfortably wide.

The visitors threatened first on the quarter hour, Will Wood’s cross from the left being glanced narrowly wide by experienced forward Danny Mills before Hamlet keeper Charlie Grainger made his first stop of the afternoon at the opposite end when McCootie received Nat Jarvis’ lay-off to engineer room for a strike which Grainger palmed wide at his near post. Pressure was maintained after the corner was cleared, a superbly timed tackle from Lee Lucas giving Jarvis the chance for a cross which ricocheted for another flag kick, however Hamlet rode the storm.

Despite having the majority of possession, clear opportunities were not plentiful for Town who suddenly found themselves trailing against the run of play on the half hour. Pacy wing back Joe Felix delivered a driven ball into the box from the right flank which Mills neatly tucked home beyond the reach of Jack Bycroft in the home goal. The visitors were also winning on the card count, George Porter being the third man in pink to go into referee Ablitt’s book after a high kick which connected with the head of Jarvis who required treatment, before the half ended with another opening for Town. A James free kick was cleared as far as Lucas whose cross picked out the unmarked McCootie, however his header was easy pickings for Grainger.

The beginning of the second half was an eventful affair. Initially it was the hosts on top, Jarvis doing well to set up James, but he couldn’t keep his shot down as it looped over the top. Hamlet immediately responded, earning a corner which fell to Nana Owusu whose angled attempt from the right side of the box saw Zac Smith block on the line. It was then back to the other end as a productive two minute spell turned the tables. A Lucas pass was laid off by McCootie for Jarvis to control on the edge of the box and fire a delightful finish into the corner, reward for the industrious striker which deservedly earnt him the Man of the Match award.

The comeback was complete on 52 minutes. A James free kick was headed clear as far as Jay Foulston and his 18 yard volley bounced past the static Grainger for the left back’s second match-winning goal of the campaign to follow the one at Hungerford in early September. Head of Football Rob Dray freshened things up with a double swap soon after, Dave Sims-Burgess and Dylan Morgan replacing McCootie and Guest, with Sims-Burgess nearly making a rapid impact when he got on the end of Budd’s lovely cross, only to see Grainger instinctively push his header away.

The final quarter of the tie saw little action in the Hamlet area, with Town content on managing the game to ensure the scoreline remained intact. However that was not without concern as the visitors conjured up enough half chances and one very presentable opportunity to have taken the game to penalties. Grainger’s long goal kick found Ashley Nzala who lobbed wide before Porter missed the clearest opening, lunging into plant Nzala’s cross over the bar from close range. Bycroft then parried Frankie Raymond’s cross-shot away at his post as Dulwich won several corners. Their efforts to snatch a late leveller proved fruitless though, with Mills afforded too much space to get on the end of two crosses from Wood but directing both headers way over the top.

After the final whistle signalled the Peacocks’ progress, Hamlets’ frustrations boiled over in the after-match pleasantries, not a complete surprise given the increasingly niggly nature of what had gone before. Town won’t be bothered though as the Cygnet Health Care Stadium again proved a bridge too far for a visiting side.

” We got over the line, we showed our resilience at home, really pleased today………..” watch Rob Dray’s Match Reaction on Peacocks TV HERE 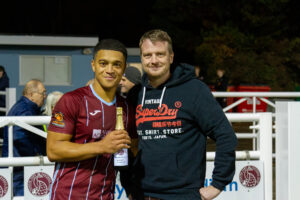