The Peacocks negotiated a potential banana skin of an FA Cup tie with a resounding victory against their Western League hosts. Mallet came into the game with an unbeaten record so far this season and the build-up touted a possible upset but although they battled well the gulf between the sides was too large, with Town, apart from a few lapses, turning in a professional performance to get the job done.

Head of Football Rob Dray had the luxury of being able to name an unchanged side from the last outing against Truro, with the only alteration being on the bench where Ioan Richards replaced Lee Lucas and Jack Veale was absent after playing for Exeter City U23’s the day before. A healthy number of travelling Peacocks fans made the relatively short trip to the West Shepton Playing Fields while home supporters anticipated progressing past the 1st qualifying round for the first time in their history and they would have been pleased with their team’s start to proceedings, a free kick from the left being headed into the middle where a Town defender cleared over his own bar. Before we go any further it should be noted that the fine detail of who did what for the home side was very difficult to determine due to the numbers being so unclear on the back of the shirts. Thanks to the Mallet Twitter for filling in some gaps.

After an initial flurry from Mallet, Town settled down. Ollie Chamberlain’s attempted pull back from Dan Sullivan’s cross was cut out by Shepton keeper Tom Easterbrook and both Chamberlain and Zac Smith sent efforts wide of the target. The best move of the match so far then saw Gethyn Hill find space but his shot only found the arms of Easterbrook. The hosts responded briefly when Andy Martin’s free kick was cleared to Craig Loxton whose shot flew wide, but the visitors were quietly beginning to assert their authority. Toby Holmes’ pass put Sullivan in space and Easterbrook was forced to parry his drive while Chamberlain teed up Ross Staley who weaved into the box and fired into the side netting.

The increasing pressure told after 29 minutes when the Peacocks took the lead. Zac Smith had a second bite of the cherry after his pass had been cleared back to him and from his chipped centre to the far post Hill was on hand to power his header into the net. A minute later and Town were two goals to the good, Hill’s diagonal ball into the box being turned home by Holmes from close range. The chance of an upset became even more remote after 39 minutes when Town were awarded a penalty after Hill was pushed down by Joel Sisson as he challenged for Jack Goodall’s cross. The Peacocks striker got to his feet to slam the spot kick into the corner for a 3-0 lead.

Sullivan and Holmes both had further shots blocked as half time approached before Mallet came mightily close to reducing the arrears a minute from the break, Dawid Regula capitalising on a defensive slip to get to the byeline and when his cross was cleared it fell to Nathan Legge who fired against the crossbar from 15 yards, with the follow-up shot travelling well wide.

A defensive slip at each end went unpunished as the second half commenced, Chamberlain intercepting Martin’s poor pass to fire over while Regula dispossessed Goodall to run in from the left but Lloyd Irish blocked his shot at the near post. Chamberlain did get on the scoresheet after 53 minutes though, instigating a brutal spell from Town which saw them net four goals in nine minutes to well and truly extinguish any hopes Mallet may still have had. Neat play involving Sullivan and Holmes set up Chamberlain to fire home across Easterbrook into the far corner for a clinical finish as Town scored their fourth and after Regula had headed the wrong side of the post from Nick Hewlett’s cross at the other end, the Peacocks heaped more misery on Mallet. Chamberlain received Sullivan’s pass to deliver a ball across goal and Holmes was running in at the far post to steer over the line on 56 minutes as Mallet struggled to cope with Town’s incisive attacks.

A double substitution immediately after nearly paid dividends, newly introduced Dan McBeam crossing for Hill to see his attempt deflect off a defender onto the bar and over. A sixth goal was not far away though, Sullivan finding Holmes who was pulled down by Fin Haines just inside the box on the hour mark. Holmes made no mistake from the spot to claim a hat trick before McBeam made it a magnificent seven two minutes later, receiving Smith’s pass to cut inside and rifle a shot past Easterbrook from 12 yards.

A rare break from Shepton ended with Regula’s shot being held by Irish but after further Taunton raids had seen both Holmes and Smith being beaten to the ball by Easterbrook, Mallet got on the scoreboard on 78 minutes, a spell of possession around the Town box culminating in Aaron Seviour’s strike from the right side of the area curving into Irish’s far corner for a great finish. Another break soon after saw Haines send an effort narrowly over before the Peacocks scored number eight on 83 minutes, McBeam’s cross from the right being controlled by substitute Jared Lewington and fired home from close range, a welcome return for the striker who was injured on the opening day of the season.

Sullivan tried his luck from way out after spotting Easterbrook off his line, but his shot was too high before Town’s injury curse struck again when Jake Wannell went down and limped off as the visitors finished the game with ten men. The last piece of action belonged to Mallet who broke upfield and from a left wing cross, the ball was bundled against the post. The contest ended straight after, with Shepton’s Cup dreams evaporated and the Peacocks convincingly through to the next round. 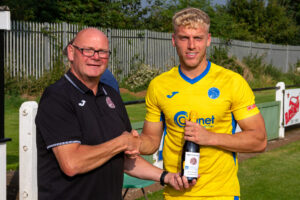